Manny Pacquiao Says Injury To His Left Eye is Not Serious

The contest took place on Saturday night at the MGM Grand in Las Vegas.

The Filipino superstar says the injury happened after his eyeball was scratched by Broner's glove. 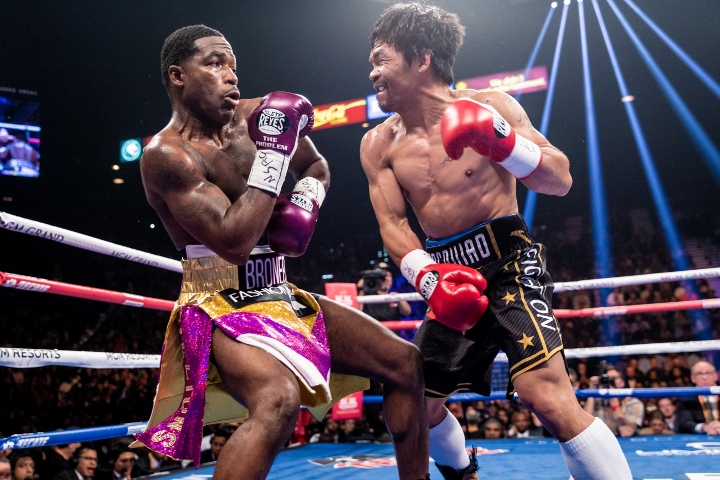 Pacquiao assured everyone that his eye injury was not serious, adding that it will heal after three to four days.

"It's okay, it's just what my eyes are watering. It's a scratch to my eyeball ... I've been through this with the right [eye]. Now it's on the left," Pacquiao said to GMA.

"There's no clutter, it's really a scratch, it's just a bit of a medicine [needed]... It's okay, God is good, we just have to rest, it's easy to heal the scratch in the eyeball."

Pacquiao said he also had a minor injury on his right eye when training for his fight with Jeff Horn in July of 2017. Pacquiao lost the bout by way of a controversial twelve round unanimous decision.

The fight with Broner was Pacquiao's first contest on American soil since a twelve round decision win over Jessie Vargas in November of 2016.

Against Broner, Pacquiao was very dominant. Two judges handed down scores of 116-112, while the third had the score at 117-111 - all for Pacquiao.

Asked what is his secret during his fights, Pacquiao replied: "Have faith in God, have faith in yourself. Work hard and discipline and of course sports passion."

[QUOTE=Fangedgrowl;19453389]I like your post normally Razor , but Like Randy Moss and Chris Carter say " Common Man!" Pac beat him at worst 10 rounds to 2. I have a question Razor. If GGG and Pac were to fight at…

[QUOTE=JimmyValmer;19450518]Hmm. Pac might be downplaying his eye injury to secure a fight with Floyd. There are reports tha he can't see in his left eye after the fight.[/QUOTE] He was in the Laker's game. So yeah, he should be fine.…

[QUOTE=j.razor;19453373]That fight was WAY closer than what everyone said it was. I had Broner winning half way through the fight then Manny won the 2nd half of the fight. Why in the world did NO ONE call Broners's punches that…

[QUOTE=InvalidUserID;19451447]Broner: See what I did? I beat Pacquiao up! Everyone: It was the tape from your glove... Broner: MY glove. Connected to my hand! So I beat up that boy![/QUOTE] [B]Broner landed left hooks & right hands.[/B] And your avatar…

That fight was WAY closer than what everyone said it was. I had Broner winning half way through the fight then Manny won the 2nd half of the fight. Why in the world did NO ONE call Broners's punches that…