Manager: GGG-Derevyanechko Was FOTY; Has To Be Rematch!

NEW YORK – Keith Connolly is convinced Sergiy Derevyanchenko’s team should be celebrating the biggest victory of his career.

Despite Derevyanchenko’s defeat to Gennadiy Golovkin, Derevyanchenko’s manager also is sure his fighter gave Golovkin such an entertaining fight Saturday night at Madison Square Garden that a huge faction of fans would want to see an immediate rematch. Derevyanchenko doesn’t have a rematch clause in his contract, but Connolly will get to work as soon as possible on securing one for the courageous Ukrainian contender.

“First of all, it was the ‘Fight of the Year,’ ” Connolly said at ringside, just after Golovkin was announced as the winner by unanimous decision. “There has to be a rematch. There has to be a rematch. There’s no other fight right now, unless Canelo fights him, that anybody else would wanna see. Sergiy proved that he’s one of the top few middleweights in the world. The crowd booed Triple-G when he was interviewed and they cheered Sergiy, so obviously everybody in the building – the writers, even DAZN scored it for Sergiy. Again, when you’re the less popular guy, this is the type of stuff that happens. But, I mean, that was definitely, in my eyes, a clear-cut win for Derevyanchenko.” 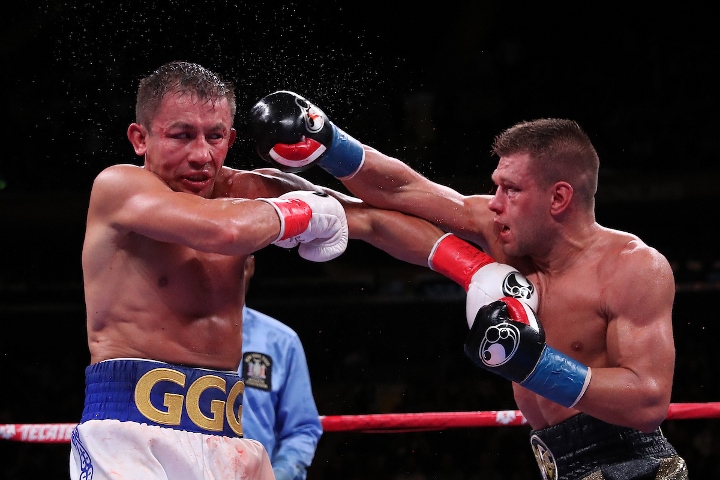 Judges Frank Lombardi (115-112), Eric Molinski (115-112) and Kevin Morgan (114-113) all scored their thoroughly entertaining fight for Golovkin (40-1-1, 35 KOs). Derevyanchenko won over the crowd, however, by battling through a suspect first-round knockdown, a grotesque gash around his right eye and the hard-hitting Golovkin’s thudding shots to give Golovkin perhaps the toughest fight of his celebrated career.

The 37-year-old Golovkin obviously will continue pursuing that third fight against Alvarez, yet he clearly has a new rival fans will want to see Golovkin fight again.

“I’m not booing Golovkin – he’s great,” said Lou DiBella, Derevyanchenko’s promoter. “But did you ever hear him get booed before?”

Much of the crowd booed loudly when DAZN’s Chris Mannix interviewed Golovkin following his unconvincing victory in their 12-round fight for the IBF and IBO middleweight titles. They cheered Derevyanchenko (13-2, 10 KOs) when Mannix spoke to him moments later.

“I mean, this is one of the best beloved fighters in all of boxing, deservedly,” DiBella said of Golovkin. “And there were people booing. What did that tell you? There were a whole lot of people in this room that know what they saw. And they saw a great fighter lose to a guy that knew that this was his moment, and wasn’t gonna let an early knockdown, wasn’t gonna let a vicious cut, wasn’t gonna let any of that stop him. That kid fought the fight of his f*cking life. And if he doesn’t get a rematch, there is no justice.”

[QUOTE=TonyGe;20111634]Can't blame them for not wanting to fight him hes relentless. Canelo has stamina issues and if Derev doesn't get knocked down he'd beat him on points.[/QUOTE] Canelo is much more comfortable mid-range... is quicker/sharper... and is a more well-rounded…

[QUOTE=R_Walken;20111631]Dibellas a Harvard Grad I’m sure he has Devre locked up like it’s a Top Rank Contract , Probably a case of Dibella leaves you , You don’t leave Dibella Haymon ruthless though he seems to have given Dibella the…

[QUOTE=factsarenice;20109827]A rematch would be great but unless it's a mandatory it's not going to happen. Sergiy is like Andrade, he's a dangerous guy that only gets an opportunity when he's the mandatory. The biggest difference between their situations is that…

[QUOTE=R_Walken;20111555]You’re Right But It’s a weird situation [B]You’d think Devre vs Charlo would be easy[/B] [B]But Devre with Dibella who doesn’t seem to have his fighters on PBC ever since He stopped being Wilders NY Promoter and his guys seem…