As a fan, the Showtime analyst thoroughly enjoyed Thurman’s 12-round fight against Josesito Lopez from his ringside seat at Barclays Center. Thurman overcame severe trouble during the seventh round to win a majority decision and retained his WBA “super” world welterweight title. 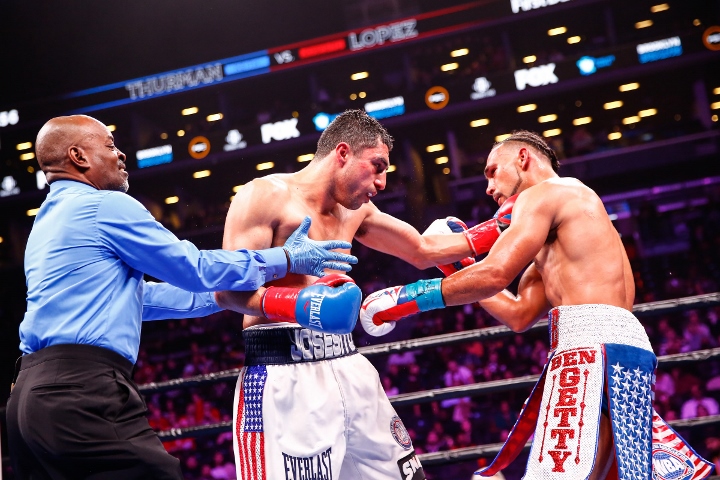 The thing Malignaggi most disliked about the “PBC on FOX” tripleheader Saturday night was Schreck’s scorecard.

“If you want something to complain about, Tom Schreck had it 117-109,” Malignaggi told a small group of reporters prior to the post-fight press conference. “So, we already know how sh*tty a judge he is, because five years ago I already told you how sh*tty a judge that guy is. So, if you wanna go from that, maybe we can complain about that. The fight was closer than that.”

Malignaggi’s major problem with Schreck, a veteran judge from Albany, New York, scored his 12-round welterweight title fight against Adrien Broner by a wide margin, 117-111, for Broner.

“I don’t know, bro,” Malignaggi said. “That guy’s still judging. What did he have for Broner, 117-110 for Broner, when I fought him? I mean, come on. … After a scorecard like that, you shouldn’t get a second chance. Certain scorecards should just get you banned automatically. If you give one scorecard that is that ridiculous, it should. But again, he gave another one tonight, so I don’t know. He’ll probably work again. I don’t know. I don’t run the New York commission, guys.”

The retired Malignaggi often has constructive conversations with judges now that calls fights for Showtime and Sky Sports.

“Some of them complain to me,” Malignaggi said. “Some of them come up to me. I’m friends with certain judges. I don’t fight anymore. We have man-to-man conversations, and it’s fine. We can always agree to disagree, and stuff like that. But I always feel like our job as fighters is more important than their job as judges. They’re gonna go home tonight and sleep good. They don’t give a f***. Tomorrow they worry about the next job they get.

“A fighter goes home, and they’ve gotta assess their career every single, f***ing time. And that’s what pisses me off. And they’ve got the balls to complain. Nah, nah. We complain. We’ve got literal careers change in one night in this sport. Lives change in one night in this sport. So yeah, it makes a bigger difference to us. So, the fighter is more important. I think that’s what gets lost in all this, that the fighter is the most important part.”

Lopez lost for the eighth time in his career Saturday night largely because Thurman out-landed and out-maneuvered the 34-year-old contender for much of their 12-rounder.

Lopez (34-8, 19 KOs, 1 NC), of Riverside, California, hurt Thurman badly during the seventh round. Thurman, of Clearwater, Florida, recovered by the start of the eighth round and landed 130 more punches overall, according to unofficial CompuBox statistics.

Punch drunk and personal grievances aside, Malignaggi is absolutely correct! See this crap too often. Why cant there be a judging selection between the two fighters camps? Sorta like picking of a jury committee. Where managers can choose judges who…

Judging in boxing is a absurdly hilarious tragedy. Complete joke. I hope things will improve someday in the future. Was just recently reading about Satoshi Shimizu (Japan) vs Magomed Abdulhamidov (Azerbaijan) in olympic boxing. What a scandal, Mamoged was dropped…

That was the only good score, Magic Man. I used to like Paulie, but damn he's acting like a bitter woman.

Then Paulie come out of retirement to show them how it’s done. Get in the ring with Thurman to see how it’ll be scored.