Magdaleno: My Goal Is To Become A World Champion Again

Their fight being pushed back one week has only heightened the anticipation for Jessie Magdaleno and Rafael Rivera.

The pair of featherweight title hopefuls were due to collide last Saturday in supporting capacity on an ESPN+ card in Philadelphia, only to get seven more days to train for a show that will carry far greater visibility. They are now set to square off this Saturday at Banc of California Stadium on USC campus in Los Angeles, Calif. (ESPN, 10:00pm ET). It comes in supporting capacity to Emanuel Navarette’s 122-pound title defense versus Francisco de Vaca, but with every intention to steal the show.

“I don’t take none of these opponents lightly,” Magdaleno (26-1, 18KOs) told ESPN’s Crystina Poncher during Thursday’s final pre-fight press conference. “(Rivera) has been in there with some great fighters and is here to put on a great show. He puts his punches together well and is quick. 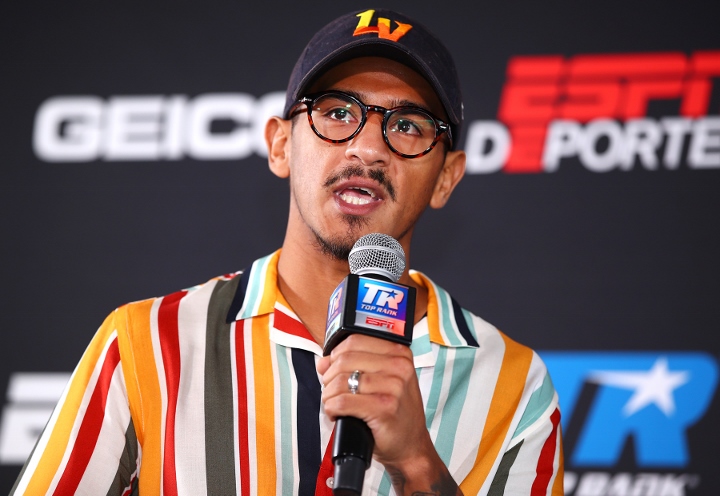 It figures to prove far more entertaining than was Magdaleno’s return to the win column. The former 122-pound titlist rebounded from a title-losing stoppage to Isaac Dogboe last April with a pedestrian 10-round win over a disinterested Rico Ramos this past March.

A far stiffer challenge is expected to come versus Rivera (27-3-2, 18KOs), a granite-chinned divisional gatekeeper from Mexico who has provided fits for many featherweights. The 25-year old from Tijuana is already fighting for the third time in 2019, rebounding from a 12-round title fight loss to Leo Santa Cruz—which he took on short notice—to score a 2nd round knockout at home this past May.

“I’ve been fighting against top level fighters for a long time,” noted Rivera. “I’m confident no matter who I’m fighting, whether a world champion or a former champion.”

Magdaleno marks his third former or current titlist faced, having conquered his first such opponent in a Dec. 2015 win over Wilfredo Vasquez Jr.

Rivera’s credentials are fully respected by the opposite corner, with the intention of parlaying a win on Saturday into a return to the title stage.

“I’m hoping once this fight goes through, God willing we get this victory I want to face one of the champions,” vows Magdaleno. “That’s my goal, to become a world champion again.”