Moscow, Russia - In the main event of the night (three swing bouts to follow afterwards), and promoted by Patriot with the support of the RBF, WBA #2 middleweight Magimed Madiev suffered his second considerable career setback with a very questionable ten-round draw against hard-hitting compatriot Artur Osipov (16-2-1, 11 KOs).

The show itself was marred by an off-ring tragedy - the death of famed MMA coach Abdulmanap Nurmagomedov. Khabib’s father was remembered with a minute of silence

Madiev’s Russian national title was at stake in a tense ten-rounder. His WBA minor belts were not as Osipov came unranked by the sanctioning body. Yet Osipov boxed solidly against active but light-hitting Madiev, who lacked power to back up his aggression.

Madiev was specifically good with fast combos on his way in. Osipov landed considerably less frequently but with more leverage. He capitalized several times on blemishes in Magomed’s defense, using a counter left hook. Madiev was rocked twice while being on the offense at the end of the sixth, and Osipov was also better in the closing rounds despite a badly injured right hand.

The problem was in scorecards, as two judges (95-95, 95-96) were in complete disagreement wit the third, who had a shutout: 100-90. Fueling the controversy was a fact that the two judges names and exact scorecards weren’t announced for whatever reason. Madiev is now 14-0-2, 4 KOs, but needs drastic improvements regardless of the certain result in order to be competitive at a championship level. 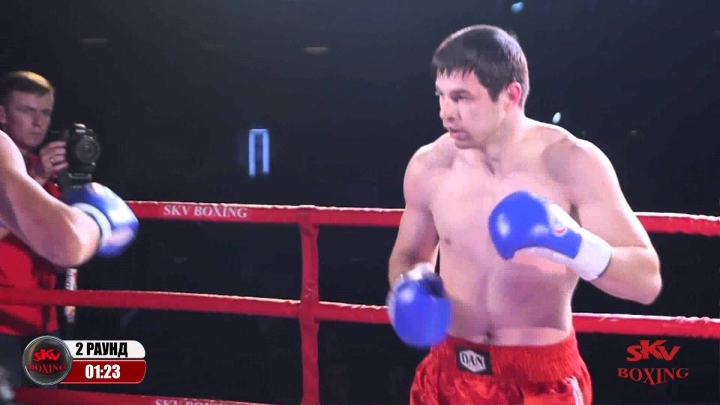 Ataev was always in the face of Aliev but mostly to receive his punches on his own face. He had some luck early on but was too reckless to capitalize. Batyrgaziev, meanwhile, took his time to adjust before starting to connect at will.

The debutant boxer didn’t connect cleanly but did it frequently, often targeting a virtually defenseless opponent who was specifically opened for uppercuts. Ataev slowed down by the fifth and was taking severe punishment by the sixth. His corner implored him to retire on his stool after the seventh.

Batyrgaziev is co-managed by Eduard Kravtsov and Maxim Alperovitch.

Flashy and swanky welterweight Sergey Vorobiev erased bad memories of his loss to Karen Chukhadzyan in February with a dominating stoppage of veteran boxer Pavel Mamontov with a stoppage in the fifth.

Vorobiev, best known for his upset win over 34-0 Konstantin Ponomarev, was better in every department, was more active and gradually beat Mamontov into submission with a mixture of jabs and body shots. One of the latter resulted in a mask of pain on Mamontov’s face and taking a knee. Pavel beat the count but signalized he was unfit to go on as the fight was waved off at 1:58 of the fifth.

A battle of heavyweights between Pavel Suslenkov (4-0, 3 KOs) and Pavel Doroshilov (4-3, 1 KO) ended prematurely after the second round due to a severe cut over Doroshilov’s left eye in what seemed to be an accidental headbutt. Suslenkov was slightly better before the stoppage.

Cruiserweight Shigabudin Aliev (9-0, 6 KOs) looked like a work in progress for the majority of the rounds in his fight against upset-minded Russian Armenian Artush Sarkisyan (6-8, 4 KOs). Sarkisyan was very solid early on and gave fits to an undefeated opponent in mid rounds... until Aliev connected with a thunderous overhand right hook, which had Sarkisyan down and out at 1:02 of the sixth.

PBA-managed Silyagin performed brilliantly against bigger but slower opponent. He dropped Lopsan with a left hook in a heated exchange late into the first, repeated the trick in the fourth, then doubled it in the seventh - this time with punches to Lopsan’s solar plexus. He also made Lopsan’s nose bleed.

Rising welterweight Shakhabbas Makhmudov (7-0, 6 KOs) made quick work of fellow unbeaten compatriot Fedor Glazkov (4-1-1, 2 KOs), dropping him with a wicked left to the liver and the finishing him off with a huge right through the guard at 2:12 of the round. Glazkov got up but was resigned by his cornermen.

The card opened up with a pro debut of light welterweight Pavel Fedorov. The lanky amateur standout boxed behind his crisp jab but lacked professional maturity to trouble experienced journeyman Rustem Fatkhullin (8-6, 3 KOs) in a six-rounder. Fatkhullin had his moments but ultimately was overcome by Fedorov’s skills and reflexes, dropping his sixth consecutive decision, which this time was unanimous. Fedorov is managed by Premier Boxing Academy.

Those fights ware not bad, definitely I am going to download this boxing card. :boxing: