Luis Ortiz's trainer, Herman Caicedo, is aware of the rumors, the jokes, the punchlines.

Luis Ortiz is older than his listed age of 40.

Luis Ortiz is older than most retired fighters.

Luis Ortiz is older than fighters who no longer exist.

A satirical website has Ortiz being born before World War II and making his professional debut when he was 75.

Entering his rematch with WBC heavyweight champion Deontay Wilder on Saturday at the MGM Grand Garden Arena in Las Vegas (PBC on Fox PPV), the talk has been of Ortiz’s improved physique, Wilder’s quest for a rematch with Tyson Fury, and of course..how old is Ortiz? Really?

The subject of age hasn’t featured this prominently in a heavyweight title match since perhaps George Foreman knocked out Michael Moorer in 1994 to become the oldest heavyweight champion ever at the age of 45. But there was no second-guessing his actual age. Everyone assumed Big George was really 45.

Not so with Ortiz, even if he’s always been listed as being born in 1979 in U.S. boxing circles.

No one’s asking for his birth certificate, but a Golden Boy Promotions press release in 2013 heralding his signing lists Ortiz, then known as “El Mercedez,” as 34, which would put him at 40 today. His listed age.

“Exactly,” Caicedo said in a phone interview. “And there’s plenty of documentation beyond that, like him participating in international tournaments for Cuba.”

The good-natured Ortiz has casually answered questions about his age for years, smiling and maintaining he's telling the truth.

Ortiz (31-1, 26 knockouts) has an old-school look, a low-key persona, a barely-above a whisper speaking voice; he walks a little like someone who’s not trying to pull a muscle. 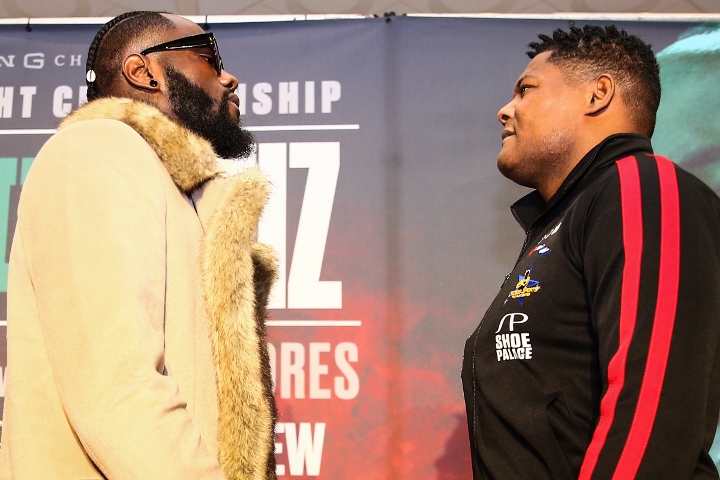 He also, before he started working with strength and conditioning coach Larry Wade for this fight, had a little paunch and some baby fat, like an old dude.

But Ortiz certainly doesn’t fight like an old man, and he, along with Fury are probably the two most skilled big men in the division, based on technique and know-how.

Ortiz is a velvety smooth technician, so relaxed and calculating in the ring he looks as if he could chew gum and fight for a world title at the same time.

He nearly sent Wilder to the canvas in the seventh round of their first fight in March of 2018 when he landed a right-hand counter to start the onslaught that was so subtle and effortless that Wilder didn’t see it.

It’s what makes the rematch so intriguing – the contrast in styles: Ortiz is an experienced hard-punching stylist while Wilder is one of the greatest knockout artists of all time, whose heart and conditioning are beyond reproach. Will Wilder be able to overcome the difference in skill and experience again? Has Ortiz, as they say, grown old in between fights? His trainer, of course, doesn’t believe age will be a factor. Wilder is 34.

“There’s no question that Luis is the most skilled heavyweight and it’s not even close,” Caicedo says. “Luis has true boxing knowledge. Deontay is still learning. He still needs to see a lot of things. We do believe he’s better from the last fight, but there’s still a lot he has to see and learn. Luis has seen it all.”

That may be true but Ortiz did slow down in the first fight and Wilder, who carries his power late, showed his championship mentality and conditioning by stopping Ortiz with a picturesque right uppercut in the tenth. Wilder was the fresher fighter, which is why Wade was brought in to improve his conditioning.

Ortiz has been at this for a while; he started boxing at age 10 and by 12 was already going away to training camps on behalf of the Cuban national system, Caicedo says. While Ortiz was a top amateur, going 343-19, he never succeeded at the top international level. Caicedo says it was due to boxing politics — he was never given the opportunity to flourish on the biggest stages.

For that reason, Caicedo says his age was never an issue and never altered. It didn’t make sense to make him younger, the South Florida-based trainer says, because he wasn't the top guy.

“Some countries will change a fighter’s age,” Caicedo said. “They’ll make a fighter younger because he’s dominating, but the politics there never made Luis the No. 1 guy, so why would they make him younger if he was never the top guy? Why go through the trouble? Why make him two years younger? It’s stupid. It’s nonsense. He’ll be 41 next March.”

The free-spirited Wilder, never one to walk away from a punchline, says he will have no trouble hitting an old man on Saturday.

“He told me 40,” Wilder said to a small group of reporters after their grand arrivals at the MGM Grand, according to BoxingScene’s Keith Idec. “In his face, he look about 45. But we’re gonna go with 40. I’m gonna give him the benefit of the doubt. And, I mean, it don’t matter how old he is. He could be 50 years old," he said, adding, "He could be 99 years old. If he's able to go in that ring, I'm gonna beat his ass."

Only time will tell.