Alameda (25-1, 13 KOs) entered this battle between Mexican southpaws unbeaten, but he had fought a very low level of opposition. He was wary of Nery’s power, but the defensive-minded Alameda took the hard-hitting Nery’s hardest shots well when Nery landed during the fifth fight of Showtime Pay-Per-View’s telecast from Mohegan Sun Arena.

“His defense was very good,” Nery said through a translator during a post-fight press conference. “But at the end, I started to really tighten up and that’s what gave me the victory.

“Not to use it as an excuse, but it’s been over a year since I’ve fought. And in regard to Alameda, we knew that he has a lot of experience as an amateur fighter and as a professional fighter. So, we knew we were gonna fight a good fighter.” 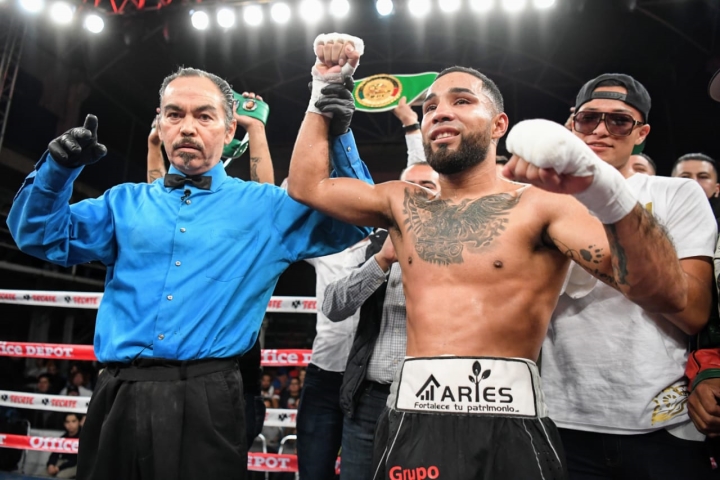 Mexico’s Rey Vargas (34-0, 22 KOs) was the WBC’s 122-pound champion, but he was relegated to champion in recess after suffering a broken leg.

Nery attacked Alameda at the start of the 12th round, but he couldn’t hurt Alameda. With just over 30 seconds remaining in their bout, Alameda landed a right hook.

A hard jab by Nery backed up Alameda in the opening minute of the 11th round. They traded hard shots inside with just over a minute remaining in the 11th.

Nery’s straight left hand made Alameda retreat late in the 11th round.

Alameda’s left uppercut caught Nery flush with about 30 seconds to go in the 10th round. Earlier in the 10th, Alameda landed a left to Nery’s body that slowed him down.

Nery landed a right uppercut in the final minute of the ninth round, but it didn’t affect Alameda. After a solid seventh round, Nery had difficulty getting past Alameda’s jab in the eighth round.

Nery landed a left-right combination to Alameda’s body with just under a minute remaining in the seventh round.

A left-right combination by Nery backed up Alameda just after the halfway point of the sixth round. Alameda’s activity and jab in the fifth round might’ve won it for him.

Alameda stood and traded with the heavily favored Nery for the first three rounds. Nery knocked Alameda off balance with a left hand about 50 seconds into the fourth round.

Nery attacked Alameda’s body later in the third, when he let his hands go more than he had during the first three rounds.

Nery is the Mexican Tank Davis. No power once he’s fighting guys his own size.

[QUOTE=JonDelPrado;20782039]Is it just me or is Reynoso not improving any of the new members of his stable?[/QUOTE] Ya I don't think they are . seems like they're getting the fighters to fight like canelo and that's not a solid plan…

Is it just me or is Reynoso not improving any of the new members of his stable?

[QUOTE=wildman;20781401]A drug free Nery isn't quite as dominant. Nery should boil back down to 118 where the attractive matches are.[/QUOTE] He can't make 118 without the drugs!