Andy Vences valiantly withstood serious trouble in the sixth round Tuesday night and later battled through a bad cut over his left eye.

“I felt I won the fight with my pressure,” Lopez said. “It was a close fight, but I was confident I did enough after the final bell sounded. Credit to Vences. I thought he was knocked out earlier in the fight, but he came back like a warrior.”

“I thought I won a close fight,” Vences said, “but I am not gonna complain about the decision. It was a good, close fight. No excuses. I prepared well for 10 hard rounds.” 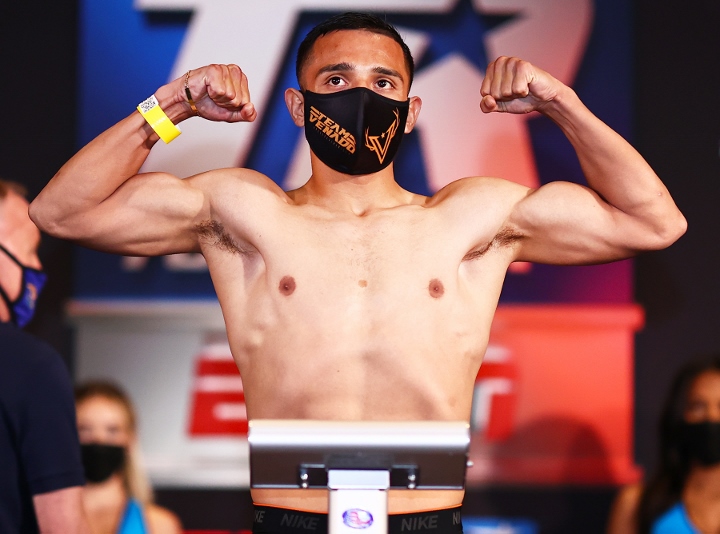 Vences continued to bleed badly from a deep gash above his left eye throughout the 10th and final round. He seemed to have regained control of their bout by then, but Cheatham and Cheek preferred Lopez’s work.

Vences’ right hand landed with just under 50 seconds to go in the ninth round. Vences missed wildly with other power punches toward to the end of that ninth round.

Another accidental clash of heads opened a cut over Vences’ left eye early in the seventh round. Bayless called for a brief break in the action, which allowed a ringside doctor to look at Vences’ cut.

A reinvigorated Vences landed several power punches toward the end of the seventh round.

Lopez’s right uppercut rocked Vences 30 seconds into the sixth round. Vences quickly tried to hold Lopez, but he was buzzed.

With just under two minutes to go in the sixth round, Bayless warned Vences for hitting Lopez low. Vences, obviously hurt and bleeding from his mouth, did his best to fend off Lopez and commendably made it to the end of a one-sided sixth round.

A short left hand inside by Lopez knocked Vences off balance about 50 seconds into the fifth round. A hard clash of heads created a cut above Lopez’s right eye and a laceration on Vences’ forehead with about 1:20 to go in the fifth round.

Vences worked well off his jab throughout the fourth round and occasionally landed counter right hands. With just under a minute to go in the third round, Vences caught Lopez with a right hand in an exchange, as Lopez was backed against the ropes.

Lopez landed several jabs in the first round, in which Vences was the aggressor.

Great competitive fight that I agree that merit a rematch and saw a either type split decision to either fighter. Don't complains here. :boxing:

I had it a close fight, didn't score the rounds individually but felt Vences edged it. Interesting to see that the fighter considered the "A" in this matchup didn't get the benefit of the doubt from the judges with there…