The breakout star of the Bubble, “Cassius” Clay Collard, is back for more.

Collard, the MMA pro-turned contender for 2020 “Boxing Prospect of the Year,” will fight Quincy LaVallais in an eight-round middleweight bout on the Vasiliy Lomachenko-Teofimo Lopez undercard on Saturday, Oct. 17 from the MGM Grand Las Vegas Conference Center. It is a rematch of their June 2019 fight, which was ruled a draw.

Collard-LaVallais 2 and additional undercard bouts, including a 10-round junior welterweight clash between top prospect Josue “The Prodigy” Vargas and Kendo Castaneda, will stream live on ESPN+ at 7:30 p.m. ET. 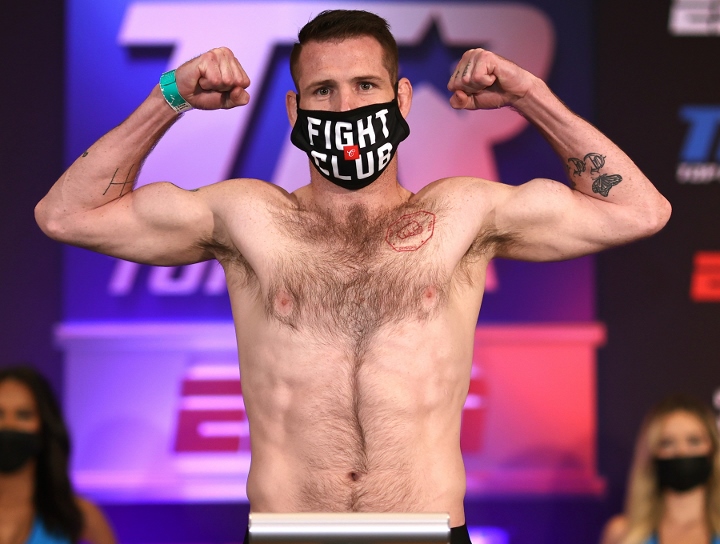 “A marquee main event deserves marquee supporting fights, and we have an incredible lineup in store underneath Lomachenko-Lopez,” said Top Rank chairman Bob Arum. “Vargas can graduate to contender with a win over Castaneda, and Clay Collard is back to once again put on a show. Tune in early to ESPN+ to kick off an incredible night of boxing.”

Collard (9-2-3, 4 KOs), who is 5-0 with 3 knockouts in 2020, began the year with three victories over previously undefeated prospects. In January, he toppled the 9-0 Quashawn Toler by unanimous decision in Toler’s hometown of Cincinnati, Ohio. The following month, he knocked out the 5-0 Raymond Guajardo in the second round of a bout that saw both men hit the canvas. He made his Bubble debut June 18 and battered the 6-0 David Kaminsky en route to a split decision nod. Collard has notched knockouts in his last two Bubble bouts and returns against LaVallais (9-0-1, 5 KOs), a native of Kenner, La. Collard and LaVallais fought in New Orleans, and LaVallais escaped with the draw. LaVallais has won two fights since, both by first-round stoppage.

"I'm a born fighter, and I'm grateful to be back on such a significant card," Collard said. "When Quincy and I fought the first time, I knew I'd done enough to win, but we were in his hometown. We're fighting on neutral ground this time."

Vargas (17-1, 9 KOs), and his teeth, made an impression in his last bout. Vargas lost a veneer, but still managed to nearly shut out Salvador Briceno over 10 rounds in an ESPN-televised co-feature. He has won 11 consecutive fights and takes a step up against Castaneda (17-2, 8 KOs), a San Antonio-born boxer-puncher coming of a competitive decision loss in July to Jose “Chon” Zepeda.

In other undercard bouts scheduled for ESPN+:

Vivas’ last fight was one of the best of 2020, a 10-round war against Carlos Jackson that took place July 2 inside the Bubble. Vivas and his hellacious body attack earned him the unanimous decision nod. Moralde, a top Filipino contender, is 3-1 since a September 2018 decision loss to Jamel Herring at junior lightweight.

Former USA Boxing amateur star Randall takes a step up in class against Rivera, a Puerto Rican knockout puncher who has yet to see the third round as a professional. Randall, from Houston, Texas, defeated Clay Collard via unanimous decision in June 2019.

The 17-year-old Tucker, who signed with Top Rank earlier this year, made his professional debut Sept. 19 and scored a first-round stoppage over Deandre Anderson.

[QUOTE=theface07;20802019]I totally disagree. Regardless of what you think the reason is, [B][SIZE="4"]the main event is still the most anticipated fight of the year.[/SIZE][/B] Of course you people would find something to complain about. I guess Davis vs Santa Cruz deserves…

[QUOTE=theface07;20802019]I totally disagree. Regardless of what you think the reason is, the main event is still the most anticipated fight of the year. Of course you people would find something to complain about. I guess Davis vs Santa Cruz deserves…

[QUOTE=ShoulderRoll;20801444]The undercard absolutely sucks. This fight isn't on PPV because it wouldn't sell well. Not because Arum is doing a great thing. Let's just enjoy the main event and leave at it that.[/QUOTE] I totally disagree. Regardless of what you…

[QUOTE=theface07;20800903]No one can complain about this card. It has the most anticipated matchup of the year with Loma/Lopez and it's not PPV. Say what you want about Arum, he is doing a great thing by putting this on regular ESPN.…

No one can complain about this card. It has the most anticipated matchup of the year with Loma/Lopez and it's not PPV. Say what you want about Arum, he is doing a great thing by putting this on regular ESPN.…