Try as it might to pass for its former self, a good portion of boxing’s offerings during the global pandemic have been aseptic. Something from the fighters, from the limited audience, just hasn’t been there. Even if, counterintuitively, the fights themselves have been enjoyable, if not thrilling.

The past eight months have produced a classic battle between Jose Zepeda and Ivan Baranchyk, a novel knockout from Jermell Charlo and a litany of highlight reel stoppages from the club circuit worldwide. But even in the best of circumstances, there has been something other than just fans missing—emotion.

To be clear, this hasn’t been the fault of the fighters at all. In fact, spun another way, there has been a heartening level of respect and appreciation between boxers in this era. In more “normal” global circumstances there is a baseline level of decorum that comes with just making weight and allowing for the fight to happen, but these days, scheduling a fight requires both fighters to slip and roll their way around a deadly virus just to make it to the scales, and later the ring. Fighters appreciate one another’s sacrifices in a way no one else can, and as a result, the build-up to even the most meaningful fights since March have been mostly timid, if not completely cordial.

That all changes this Saturday night when Vasily Lomachenko and Teofimo Lopez step in the ring together.

Lomachenko and Lopez will battle for the unified lightweight championship on ESPN, but the two have been battling verbally for much longer than just this press cycle. Their desire to fight one another is rooted in more than just their hunger to hold all of the lightweight belts.

According to a recent story by Greg Bishop of Sports Illustrated, the feud between the two stems from an October 6 incident in which Lopez’s father and trainer, Teofimo Sr., confronted Lomachenko at a pre-fight press conference. Lopez was fighting on the undercard of Lomachenko’s headline bout against Jose Pedraza, and neither he nor his father were thrilled with their “secondary” positioning in relation to Lomachenko. 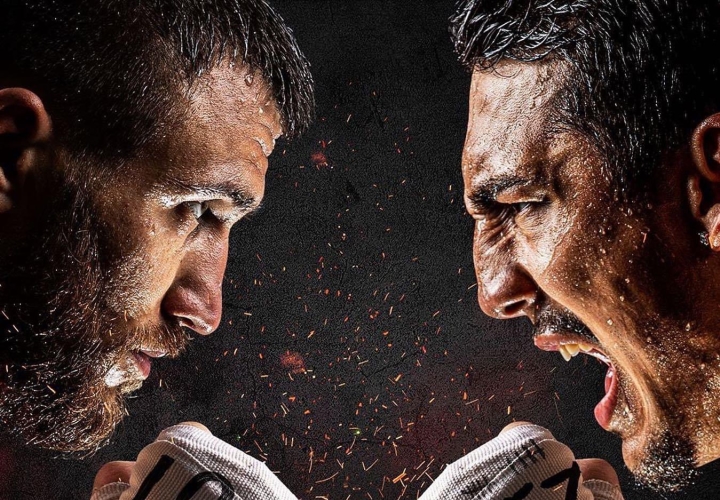 Later that night, Lopez Sr. confronted Lomachenko and told him in no uncertain terms—“he will kill you”—that his son would steal the show that weekend, and one day, steal his titles as well. Lomachenko, naturally, did not take kindly to his behavior.

Though Lopez Sr. can often assume a role similar to Angel Garcia for his son Danny, in that he is the loud antagonist, unlike Danny, Teofimo doesn’t try to downplay or couch his father’s behavior. Particularly when it comes to Lomachenko, he feels the same way his Dad does.

“They had their own altercation in person. But I look at it as a personal thing,” said Lopez during media availability last week. “I have my reasons. I have seen how Vasily Lomachenko carries himself outside of the sport, and I got to witness that personally due to the fact that I'm a professional athlete and I can see behind the scenes, and I don't like it.”

Fans recently got a sneak peak behind the scenes during Top Rank’s “Blood Sweat & Tears” series, in which an “edgier” side of Lomachenko was revealed—one that Ukrainian fans are a little more familiar with. Due to the language barrier and the fact that Lomachenko’s English is still improving, he hasn’t been as verbose in response to stateside media inquiries as he might have wanted to be over the years.

But when it came to Lopez and his conduct towards him, Lomachenko has certainly found the words.

“Back home, if you said something or insult somebody, you can get hit and get into a fistfight right in the street and nothing is going to happen. Here in the States, it's a completely different law. Back home, people don't run their mouth like this because they know they'll have to answer for it somehow,” said Lomachenko during a Zoom media call last week.

Lopez says he has no problem answering for it—inside the ring of course.

“I'm not trying to get under his skin, I'm just being outspoken. Come that night, if he wants to take it out on me, great, I'm trying to take it out on him too,” said Lopez. “I can't wait to put hands on this man. I'm sorry Bob (Arum), I know that's your guy, but he ain't gonna be your guy after this.”

Between the trash talk, the full-scale promotion and the magnitude of the stakes (the legitimate claim of lightweight champion), Lomachenko-Lopez has a decidedly different feel from the fights that have preceded it in 2020.

Beyond the emotion involved, there may be a simpler explanation. In a year in which everything has been taken from us, the sport that so often specializes in giving us just a little less than what we asked for is suddenly giving us everything we’ve wanted.

It’s giving us the exact fight we asked for. The two best lightweights on the planet. Perhaps the best fighter on the planet against a young challenger bold enough to tell him, and to tell us that we were wrong for thinking that about him.

“I've heard this a lot of times from a lot of boxers,” said Lomachenko. “Then you come in the ring and you forgot about your words and your promise. You try boxing, you try fighting (but it doesn't work). For me, it's just trash talk, it's just words. We'll see what happens in the ring.”