Vasiliy Lomachenko stopped Jorge Linares in the 10th round of their lightweight championship fight Saturday night, winning a title in his third weight class in just his 12th pro bout.

Lomachenko landed a hard left to the body during a flurry of precision punches that sent Linares went to a knee. Linares finally got up just as the count was reaching 10 but referee Ricky Gonzalez called an end to the fight at 2:08 of the round. 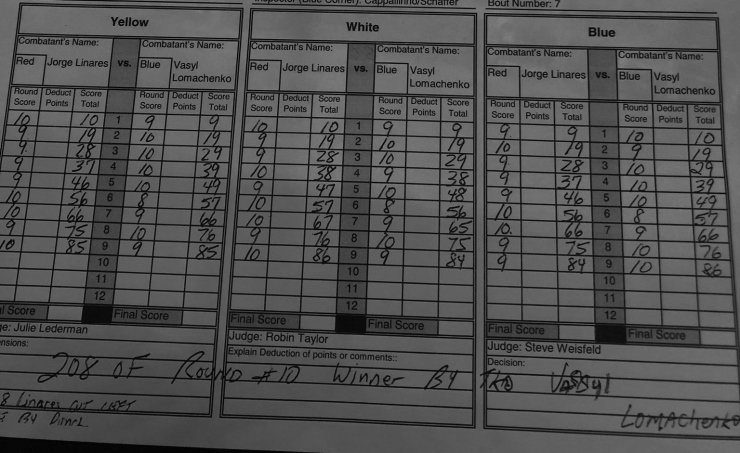 Linares knocked down Lomachenko in the sixth and the fight was all even after nine rounds before Lomachenko (11-1, 9 KOs) put an overpowering end to his first fight at 135 pounds, adding that title to his belts at 126 and 130 pounds.

Linares (44-4, 27 KOs) hadn’t lost since 2012 and used his size advantage to do some damage, but in the end Lomachenko did more in an exciting Madison Square Garden match.

Each fighter was ahead 86-84 on a judge’s card, while Julie Lederman had it 85-all after nine rounds.

Lomachenko said Thursday he needed to finally be put in danger to show his complete array of skills, and then on display in the 10th round with a series of shots that Linares couldn’t defend, especially the left to his midsection that took the biggest toll.

But unlike when he fought at the smaller Theater inside MSG in December in his last bout, a sixth-round stoppage of the smaller Guillermo Rigondeaux, this time Lomachenko faced a bigger man and a much bigger test.

I cannot possibly understand giving Linares more than 3 rounds. It makes no sense to me.

[QUOTE=Vlad_;18765855]Sure... And here is Mikey Garcia totally not getting knocked down: [IMG]https://cdn1.sbnation.com/imported_assets/1908321/1.gif[/IMG] Saw that knockdown? Now imagine what Roman Martinez would do to Loma, how he would destroy him... :fu2:[/QUOTE] Didn't Bumchenko get knocked down like that

First two cards are shocking, glad Loma put him out, golden girlz will be sick lol

I had linares edging it...

[QUOTE=mabulkhair;18765755]I gotta give it to Loma, being a 3 division champ in only your 12th fight is unheard of and will be hard to beat. I don’t understand why Loma has a lot of haters? Can someone plz answer this…