Vasiliy Lomachenko pulled away in the second half of the fight, outlanding Luke Campbell 140-73 in rounds 7-12. 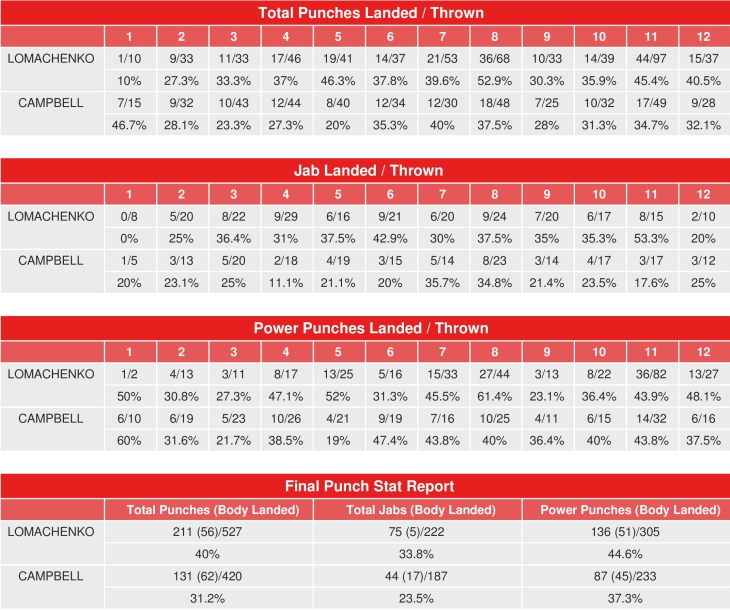 Vasyl Lomachenko's big goal in boxing is to become unified champion in one weight category.

He's one win away from achieving that dream.

Considered among the world's greatest pound-for-pound fighters, Lomachenko added the vacant WBC belt to his WBA and WBO titles at lightweight with a unanimous points win over Britain's Luke Campbell on Saturday.

Two judges awarded the fight 119-108 to Lomachenko, with the other giving it to the Ukrainian 118-109 at the O2 Arena in London - the city where, seven years ago to the day, he won one of his two Olympic gold medals.

Campbell, also an Olympic champ in 2012, gave Lomachenko problems with his longer reach but struggled to make it to the final bell after being knocked down in the 11th and desperately wrestling his opponent to the canvas in the 12th while in survival mode.

A stunning amateur fighter, Lomachenko is breaking records as a pro, having become the quickest boxer to win world titles at three weights, in just 12 fights.

Only Ghana's Richard Commey, who holds the IBF title, stands between Lomachenko and a sweep of the 135-pound belts. Commey is set to fight mandatory challenger Teofimo Lopez Jnr. in December, and perhaps Lomachenko after that.

[QUOTE=belmondoss;20029652]Loma's natural weight is two weight division lower and still he is able to beat da **** outta guys that are bigger, with longer rich at their backyards and every win is convincing. I hope all black people stop talking…

[QUOTE=Blond Beast;20029612]He doesn’t take rounds off.[/QUOTE] You're right. He often gives away the first round, sometimes even part of the second too, while he is working his opponent out. From there he just keeps building momentum until the end. It…

Loma's natural weight is two weight division lower and still he is able to beat da **** outta guys that are bigger, with longer rich at their backyards and every win is convincing. I hope all black people stop talking…

Campbell did way better than I expected here. I give him respect for it but I said all along Campbell's best wouldn't be good enough. Someone with power and speed would really give Loma problems at this weight.

[QUOTE=MickG;20029573]I was at this fight last night and I'm so glad I got to see lomachenko in the flesh. Watching him on TV doesn't do him justice. Footwork, movement, recovery and the snap in his punches (even the little tippy…