LOS ANGELES - Vasiliy Lomachenko underwent arthroscopic surgery Wednesday morning at Cedars-Sinai Kerlan-Jobe Institute in Los Angeles to repair a torn labrum in his right shoulder suffered during the second round of his May 12 bout against Jorge Linares.

Lomachenko will begin the recovery process immediately and is hopeful that he will defend his World Boxing Association (WBA) and Ring Magazine lightweight titles before the end of the year. 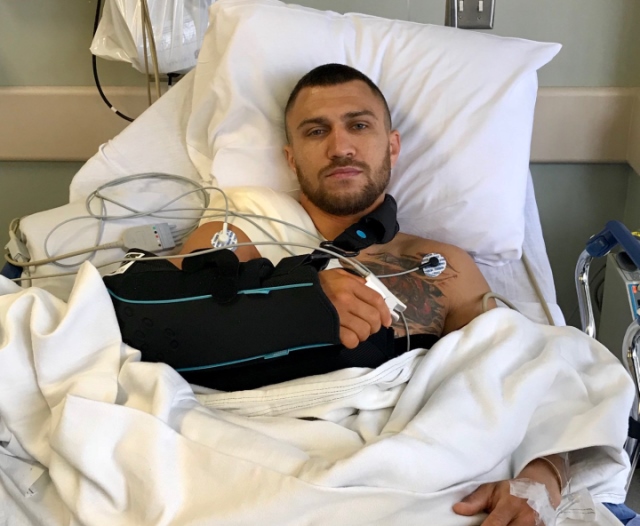 Said Dr. ElAttrache: “Vasiliy had the anticipated injuries in his right shoulder, resulting from a dislocation event that he sustained during his fight on May 12.

"In particular, he had an extensive labral tear, approximately 270 degrees with a small amount of cartilage damage and a bone impaction injury, all resulting in instability of the shoulder. He underwent an arthroscopic repair of the labrum as anticipated with no complications.

"Based on the result of the surgical repair, we are optimistic for an excellent prognosis and for him to return to competition at his previous level of performance.”

Lomachenko got off the floor in the sixth round, to stop Linares in the tenth round at Madison Square Garden in New York City. The win gave Lomachenko his third divisional belt after capturing world titles at featherweight and super featherweight.

Good news. Hope he heals up nicely, can't wait to see him back in the ring embarrassing dudes

Good to hear. Be well champ! Looking forward to his return.

“Based on the result of the surgical repair, we are optimistic for an excellent prognosis and for him to return to competition at his previous level of performance.” That’s what I like to hear.

[QUOTE=MisanthropicNY;18820844]You should have watched the fight in slow motion without Roy Jones' FIomo-ing.[/QUOTE] Lol. Yea. Slomo with no flowwmoes at the Kokomo surrounded by the Filipino mafioso, then the magic works. Without Roy flowwmoing, And the other two guys who…