For the fourth consecutive fight, WBO super featherweight champion Vasyl Lomachenko forced an opponent to quit on his stool. In this case, Guillermo Rigondeaux retired on his stool between rounds six and seven, claiming an injury to his left hand.

Lomachenko was more active (56.5 per round to 29.7) and slightly more accurate, though the numbers were low (16% for Loma, 8% for Rigo). Lomachenko's 16 total connects in round four tied Nonito Donaire's effort in round 10 for the most total punches ever landed by a Rigondeaux opponent.

Rigondeaux never landed more than three punches in any round. 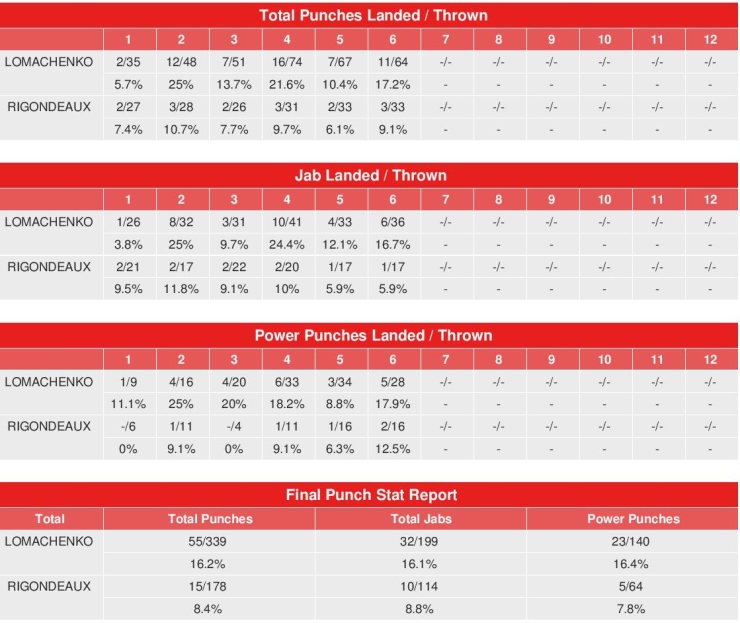 Rigo threw 178 punches? I swear I must've watched a different fight cause I didn't see him throw 50 punches.

[QUOTE=RoyJonesJrp4pno1;18323486]It's going to be hard to replicate for anybody. Lomachenko has been programmed by his father from birth to do this. His father is smart as well making him take dance classes to improve footwork and mind, reflex and agility…

[QUOTE=Marvlus Marv;18323036]That's Walters and now Rigo going into the books as two stoppages for Loma. He can make guys quit and not even rock them once. It's a whole new style of fighting.[/QUOTE] It's going to be hard to replicate…

Punch stats basically show who happened. Both fighters missed damn near every punch they threw.

That's Walters and now Rigo going into the books as two stoppages for Loma. He can make guys quit and not even rock them once. It's a whole new style of fighting.