NEW YORK – Vasiliy Lomachenko is open to a rematch with Jorge Linares, but his promoter cautioned that it won’t happen next.

The lightweight championship bout between Lomachenko and Linares definitely was competitive and entertaining enough to warrant a rematch. Bob Arum, Lomachenko’s promoter, still plans to match Lomachenko against another opponent August 25 at The Forum in Inglewood, California.

Arum and Lomachenko’s team haven’t settled on an opponent. Ray Beltran, the WBO lightweight champ, is one of the top options because the Mexican veteran from Phoenix would give Lomachenko a chance to added another 135-pound championship to the WBA world lightweight title he won by stopping Linares in the 10th round Saturday night at Madison Square Garden. 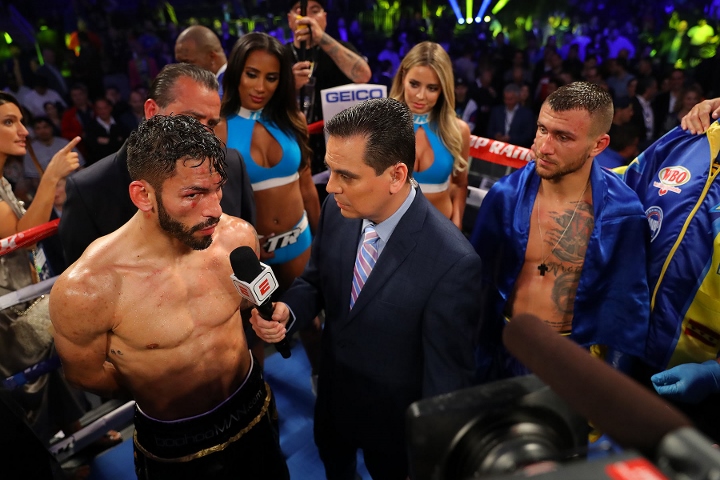 Entering the 10th round, during which Lomachenko landed a body shot that ended their back-and-forth battle, judge Steve Weisfeld had Lomachenko in front, 86-84, the same score by which judge Robin Taylor had Linares ahead. The third judge, Julie Lederman, had their fight even through nine rounds (85-85).

Venezuela’s Linares (44-4, 27 KOs) became the first professional fighter to drop Lomachenko (11-1, 9 KOs), who went down from a straight right hand with 31 seconds remaining in the sixth round.

“Jorge Linares is a tremendous fighter,” Arum said during a post-fight press conference. “And if and when a rematch happens is up to his able promoters, Golden Boy and Teiken, my friend, [Honda]. I’m sure toward the end of the year, maybe the beginning of next year, we’ll have that conversation. But right now, it’s premature.”

The 30-year-old Lomachenko, who became a world champion in a third weight class, said he would welcome a chance to battle Linares again.

“If the promoters want to talk about that,” Lomachenko said, “and it’s gonna be interesting for the fans and for everybody, why not? I’m open to that.”

Not much point in a rematch. Loma will make it very one-sided next time and bury Linares inside 5.

Good fight for sure, but ko's don't need an immediate rematch. See if you can get Tank, Manny, or Garcia in the ring.

It was a GREAT fight. Let Loma get his tuneup against Beltran and Linares get a W. If the Garcia fight doesn't happen for either guy, make the rematch!

I give Lomo credit for moving up in weight (unlike lil g) and beating the first real dangerous opponent of his career. But if Mikey lands the shot Linares put him down with, Lomo better grab a blankie cuz it's…

Loma will do better in his next fight as his body will be able to adjust more with the new weight. Best to unify all belts then try 140. Garcia vs Loma will be the fight of the decade.