Lomachenko on Teofimo Lopez: If You Have Belt, I'll Fight You

Crolla (34-6-3, 13 KOs) is a big underdog against the masterful Lomachenko, whose technique and athleticism have propelled him from two Olympic gold medals to the short list of the world’s greatest pound-for-pound fighters.

“It’s a very exciting place,” Lomachenko said. “After my first (LA) fight at Microsoft Theater, I looked across the street and thought, ‘Wow, maybe someday I can get into Staples Center.’” 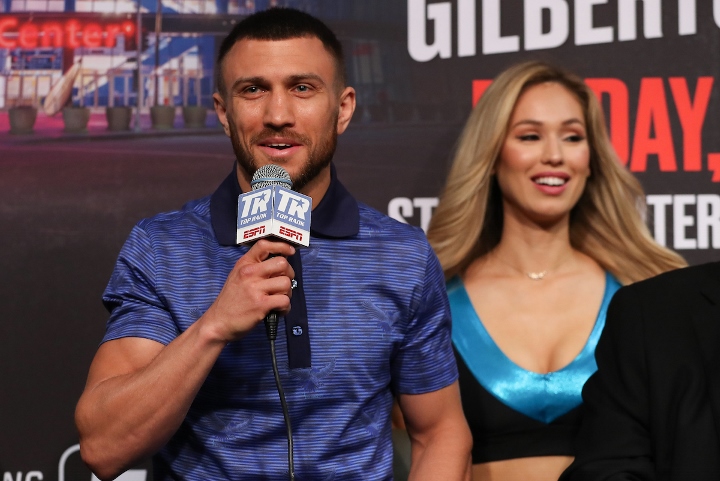 Any opponent under 140 pounds would be an underdog against Lomachenko, but the lack of a theoretically worthy opponent doesn’t interest the champion. Until a bona fide challenger to his dominance emerges at 130 or 135 pounds, he will keep racking up wins.

“I don’t care,” Lomachenko said. “In my fights, I just want to show off my skills. My opponent, whoever. I just want to enjoy it and to put on a good and interesting fight.”

Lomachenko’s next fight was supposed to be a title unification bout with Ghana’s Richard Commey, who holds one of the two remaining lightweight belts that Lomachenko covets. But Commey emerged from his bout Feb. 2 with an injured right hand, and Lomachenko elected to stay active by entertaining his mandatory challenger for the WBA crown.

Crolla has watched Lomachenko’s bouts with admiration, but he has been fighting for too long to be intimidated.

Crolla is making his U.S. debut, but the Manchester native is likely to have every British athlete’s contingent of vociferous stateside fans. Crolla has another advantage, according to Lomachenko.

“He’s very good, and he’s in a comfortable position because he has nothing to lose,” Lomachenko said.

Lomachenko isn’t looking beyond Crolla to other fights, partly because no big fight looms. He wants Commey’s belt, but the biggest money would come from a showdown with former American lightweight champion Mikey Garcia.

“I get nervous a little before a fight, but when I step in the ring, I’m in my place,” Lomachenko said. “I start to enjoy it right away. A couple of rounds, and then I find my moment.”

Lomachenko is open to facing him - if he gets a belt.

“I’m ready for everyone. I need the belts. If you have a belt, you can come in the ring and I’ll fight with you.”

I used to feel so alone, and so many questioned my IQ! The push for Loma vs. Lopez keeps growing! If Lopez gets a KO @ MSG, I believe ESPN will fully embrace the push! Be observant! Listen to clues…

[QUOTE=Ake-Dawg;19651612]I am a lomachenko fan, but his comments are beginning to be a little GGGish. Like GGG I appreciate his talent and skill, but want to see him in more meaningful fights, particularly in fights where maybe he overcomes a…

[QUOTE=BoxingIsGreat;19651816]You should give a f[I]u[/I]ck. If you don't talk respectfully to the members here, you will be banned. Have respect for the fighters too. Both are bannable offenses according to Boxingscene rules. Have some respect. Talk like a man.[/QUOTE] I…

[QUOTE=BoxingIsGreat;19651816]You should give a f[I]u[/I]ck. If you don't talk respectfully to the members here, you will be banned. [B]Have respect for the fighters too. Both are bannable offenses according to Boxingscene rules. Have some respect. Talk like a man.[/B][/QUOTE] :lol1:…

[QUOTE=kushking;19651592]"any opponent under 140 would be an underdog to loma" What a bunch of bs if i've ever heard it. Loma has not seperated himself from anyone elite at 135 ffs to be making such rediculous claims. Loma looks like…