Lomachenko On Rigondeaux Injury: I've Fought With One Hand

NEW YORK – Vasyl Lomachenko wouldn’t have stopped fighting if he was the one that suffered a hand injury Saturday night.

Lomachenko didn’t go as far as to say he believes Guillermo Rigondeaux faked his left hand injury to get out of their fight. He did question Rigondeaux’s decision to stop fighting following the sixth round of their WBO super featherweight championship match in The Theater at Madison Square Garden. 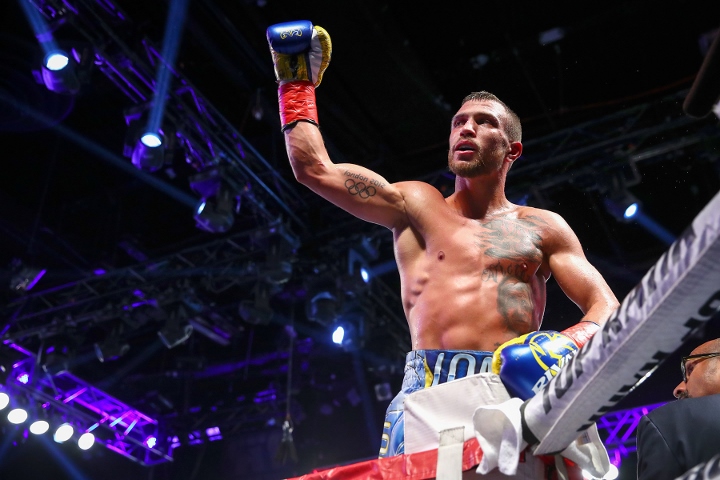 The southpaw from Ukraine recalled suffering an injury to his left hand nearly midway through a fight three years ago in Macau, China. Lomachenko fought through that pain and still defeated Thailand’s Suriya Tatakhum by unanimous decision in their 12-round fight at Cotai Arena on the Manny Pacquiao-Chris Algieri undercard.

“You know, I fought with one hand in Macau,” Lomachenko said. “So it depends [on] you. If you wanna win, if you wanna fight, you’re willing to die in the ring.”

A post-fight X-ray revealed Lomachenko’s left hand wasn’t broken in that bout, but the two-time Olympic gold medalist endured considerable pain to win every round of his fight against Tatakhum. Rigondeaux wasn’t sure after the fight if he suffered a broken bone in his left hand when he hurt it in the second round.

The 29-year-old Lomachenko (10-1, 8 KOs) wanted to hear from Rigondeaux (17-1, 11 KOs, 1 NC) about why he decided not to continue fighting Saturday night, especially after promising to knock out Lomachenko amid a barrage of pre-fight trash talk. He didn’t get that opportunity because Rigondeaux didn’t attend the post-fight press conference.

“Where is Rigo?,” Lomachenko asked. “We need to ask him now about his posts [on social media].”

Bob Arum, Lomachenko’s promoter and Rigondeaux’s former co-promoter, questioned the validity of Rigondeaux’s injury. Arum suggested the 37-year-old Rigondeaux’s will was broken, not his hand.

Regardless, Lomachenko was way ahead on all three scorecards when Rigondeaux informed referee Steve Willis he couldn’t continue (60-53, 59-54, 59-54). Willis deducted a point from Rigondeaux for excessive holding in the sixth round and had warned him numerous times for fouls before taking away that point.

[QUOTE=CubanGuyNYC;18326058]Haha Yeah, okay, douchebag. I see you haven’t got anything to back up your garbage.[/QUOTE]that conversation is still in the forums. I don't need to re-post it to make it true!

I remember watching the one handed loma fight! and as far as rigo! he is full of MIERDA! I saw the fight on ESPN on sat. but I watched it again last night on ESPN Deportes(Spanish version) and rigo complained…

Fighters don't usually quit with hand injuries. He quit because he was getting outclassed. If he wasn't, he would have fought on with the injury.

[QUOTE=Tankdestroyer;18325803]haha, you already embarrased yourself. Follow up on rigo's example and Quit your argument cuban peasant![/QUOTE] Haha Yeah, okay, douchebag. I see you haven’t got anything to back up your garbage.

[QUOTE=CubanGuyNYC;18324475]Lmao You’re calling me names on an Internet forum and [B][I]I’m[/I][/B] the coward? Haha Tell you what, princess. Why don’t you copy and paste those posts you claim I wrote. You can embarrass me that way. Go ahead. I’ll wait.…