Lomachenko Has No Worries Over Facing Campbell on UK Soil

Vasiliy Lomachenko said he was shocked by the positive reaction of the British fans, who turned out in big numbers to cheer him at the public workout ahead of his world lightweight title fight against Luke Campbell.

Lomachenko said he was expecting a hot reception at York Hall in East London on Wednesday night, but the opposite happened as hundreds of fans came along in the evening for the chance to get a glimpse of the WBA and WBO champion.

The Ukrainian is on familiar ground, having boxed at York Hall in 2013 when he beat Sam Maxwell by a unanimous points decision over five rounds as part of the Ukraine Otamans team that took on the British Lionhearts in the World Series of Boxing. 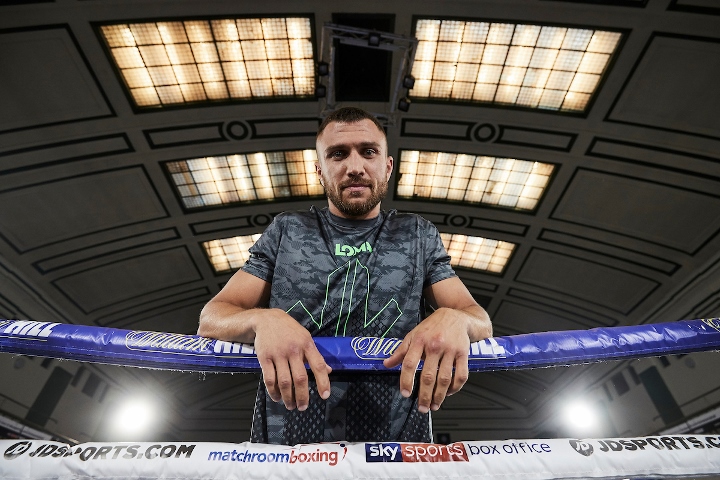 That night the Ukrainian fans outnumbered the British fans, cheering on their team, which also included Oleksandr Usyk, who beat Joe Joyce in a super-heavyweight bout.

That performance came a year after Lomachenko claimed Olympic gold at lightweight in the London Olympics, where Campbell won the bantamweight gold. That tournament was held at ExCeL, a giant exhibition centre that is a cable car ride away from the O2 arena where the pair will meet on Saturday night.

Despite his good reaction on Wednesday, Lomachenko is not sure how many will be backing him in the arena on Saturday night.

“I don’t know because I am fighting a famous British guy, he has a lot of fans and we are here in the UK,” Lomachenko said. “But I don’t care about it. Of course it is not easy, but I have a dream and that is to unify the title and that is why I have come here.

“My preparation was good, I am ready 100 percent. Of course I have a little bit of nerves, it’s good for humans. I give you the prediction, you will see a very good, interesting fight.”

Campbell was late for the workout, having been caught out by traffic as he made his way across the city from his west London base.

“It’s a fantastic opportunity for me. I’ve got the best team around me and we're all confident. It doesn’t matter how I do it, I get the win.”

[QUOTE=Lomasexual;20023585]Yeah, the odds are a bit disrespectful to Campbell. If [B]your betting strategy[/B] includes putting money on underdogs who are better than the odds suggest, then this might be a good choice. I just can't see him winning though.[/QUOTE] betting…

[QUOTE=BIGPOPPAPUMP;20021322]Vasiliy [B]Lomachenko[/B] said he [B]was shocked by the positive reaction of the British fans[/B], who turned out in big numbers to cheer him at the public workout ahead of his world lightweight title fight against Luke Campbell.[[URL=https://www.boxingscene.com/?m=show&id=142087]Click Here To Read…

[QUOTE=Iron Fister;20021794]It's actually true. America is the best country in the world. Why deny it? Just accept it. England punches above it's weight as well but the America is definitely leaps and bounds ahead. [B]Facts[/B][/QUOTE] Donald??? Is it you???

[QUOTE=SteveM;20021656]I'm going to put a few quid on Campbell. I don't expect him to win but I'm playing the odds which are over generous - this should be a tougher fight than most expect[/QUOTE] Yeah, the odds are a bit…

[QUOTE=Iron Fister;20021794]It's actually true. America is the best country in the world. Why deny it? Just accept it. England punches above it's weight as well but the America is definitely leaps and bounds ahead. [B]Facts[/B][/QUOTE] By what metric is the…