Lomachenko: My Father Has A Plan, I'm Just A Player In His Game

As much as Vasiliy Lomachenko has accomplished—and continues to do so—there isn’t a hint of hesitation in paying respect to the driving force behind his incredible boxing journey.

The second part of ESPN’s ‘Blood Sweat and Tears: Lomachenko vs. Lopez’ series noted the relationships between the boxers and their fathers who double as their head trainers ahead of Saturday’s massive multi-belt lightweight unification clash with Teofimo Lopez (15-0, 12KOs).. In Lomachenko’s corner is ‘Papachenko’ Anatoly Lomachenko, with the two sharing a tight knit bond.

“They have a very good relationship,” noted Egis Klimas, Lomachenko’s career long manager. “I see them much more as father and son than as trainer and fighter. I see them arguing a lot of times. Guess what? Every argument comes out with (Anatoly) being the right one. 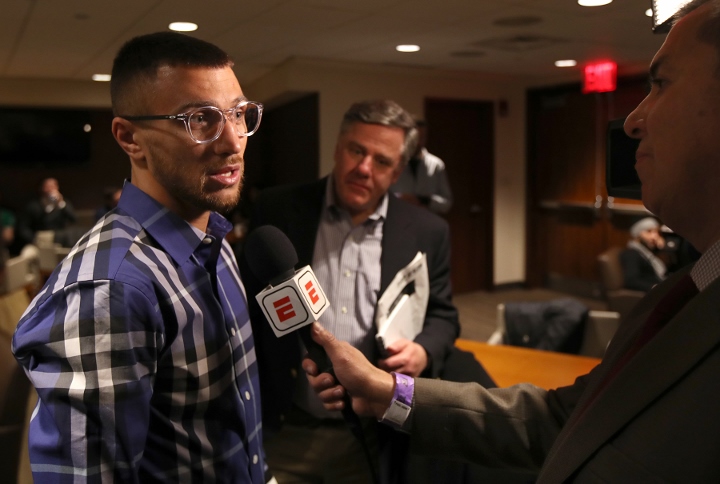 That assessment is fully shared by the boxer himself and for good reason.

Ukraine’s Lomachenko (14-1, 10KOs) is on the very short list of those considered to be the greater amateur boxer of all time. His tour included two Olympic Gold medals and a 396-1 record before turning pro in 2013. Just 15 fights has come of his career, though all but one at the title level, having collected hardware in three weight divisions.

The team cleaned up in the 2017 year-end awards. Lomachenko earned Fighter of the Year honors as recognized by the Boxing Writers Association of America, with ‘Papachenko’ being named Trainer of the Year—the first of two straight years—and Klimas as Manager of the Year of the second of three consecutive awards.

“My father has a plan, he has a strategy,” notes Lomachenko, who has a tattoo of Anatoly’s visage on the left side of his torso. “I’m just a player, I play his game. I believe in him. I’m a believer and we do this.”

[QUOTE=MrShakeAndBake;20816787]some ghetto bastard children never had a father figure in their lifes so its funny to them... crack sprinkled...[/QUOTE] What provoked this post?

some ghetto bastard children never had a father figure in their lifes so its funny to them... crack sprinkled...

[QUOTE=GrandpaBernard;20816700]Should name this fight Daddys’ Boy[/QUOTE] Hahahaha :lol1: The WBC ‘Daddy’s Boy’ belt will be up for grabs.

who's papa plan is the best this week so?