Lomachenko: Lopez's Size, Reach Made It Difficult To Get To Him - Wants Rematch

Vasiliy Lomachenko was somewhat at a loss for words describing what had just transpired soon after he lost a unanimous decision to Teofimo Lopez last week in Las Vegas.

Days after the fight had finished, and Lopez was crowned as the unified IBF, WBO, WBA and WBC Franchise titlist, Top Rank released a clip documenting behind the scenes footage of the fight moments after it had finished.

Lomachenko (14-2, 10 KOs) did not participate in the traditional post-fight press conference to share his thoughts on what went wrong against Lopez, and why he offered little offense in the first seven rounds — he only spoke a few words to ESPN’s Mark Kriegel in the post-fight interview, telling him he took over in the second half of the fight. 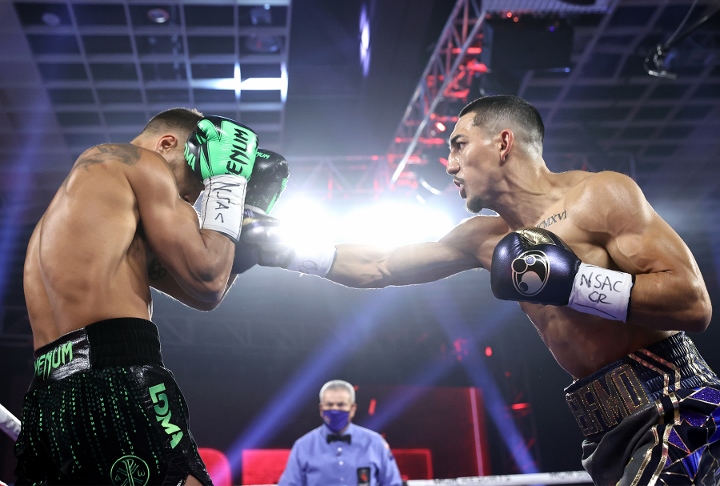 However, cameras caught up with a dejected Lomanchnko in the locker room after the fight, where he admitted for the first time that size seemed to matter against the bigger Lopez (16-0, 12 KOs).

“Right now it is hard for me to comment on the fight. I understand everyone is frustrated but I want to watch the fight first before commenting. Because of his size and his reach, it was not easy to get to him,” said Lomachenko. “I just want to say to all the fans I am sorry if I let you guys down. I want to thank all my team and I want to let them know we will move forward.”

Less than 48 hours after the fight, Lomachenko returned to Los Angeles and had to undergo right shoulder surgery for the second time in two years. Lomachenko was battling shoulder pain during training camp, so much so that he needed multiple shots to alleviate the pain. Lomachenko never publicly admitted or complained of the shoulder ailment until the news of the surgery became known this week.

Lomachenko has frequently admitted that 135 is not his preferred weight class, and that he feels better fighting at 130. Although Lomachenko still has to contemplate which weight class he wants to compete in moving forward, he can’t wait to get another crack at Lopez — if the opportunity presents itself.

“It depends on Lopez, if he can give me a rematch. Of course I am ready. Of course I want it,” said Lomachenko.

[QUOTE=BillyBoxing;20862890]]He can't stand Loma's blond a77, forget about him, coming here detracting a fighter because of what he represents makes him feel better and more secure, he's not stopping anytime soon. He needs it to maintain his psychologic integrity. And…

[QUOTE=IRONCHINHAGLER;20839816]sure Bro - p4p #1 or #2 across the board...all hype! Ur right and all the boxing insiders,analysts, commentators, writers got It wrong - congrats !! U should b getting paid for ur expertise in boxing!! Lol![/QUOTE] ]He can't stand…

[QUOTE=BoxingIsGreat;20839263]All the boxers you named don't have any. Career defining fights are fights like Ali-Foreman, the Pacman-Marquez, [B]Floyd-Canelo[/B], Vargas-Tito, etc. High skills and pride. Some have more than one. Loma isn't a career defining fight for Lopez. He was mostly…

If there is a rematch and Loma wins, there should be a third fight. Loma winning and moving on would not be cool.

[QUOTE=Walexhris;20835936]Lopez seemed turned on by that cut, you do realise the cut wasn't caused by a punch?[/QUOTE] Very impressed with #TheTakeover coming on after the cut for sure. I’m aware the cut was caused by a clash of heads. I’m…