Vasiliy Lomachenko-Jorge Linares was a much more competitive, compelling fight than Lomachenko’s domination of Guillermo Rigondeaux, but it didn’t draw greater ratings.

Lomachenko’s previous performance, a technical knockout of the previously unbeaten Rigondeaux on December 9 in The Theater at Madison Square Garden, drew a higher average rating for ESPN (1,730,000). 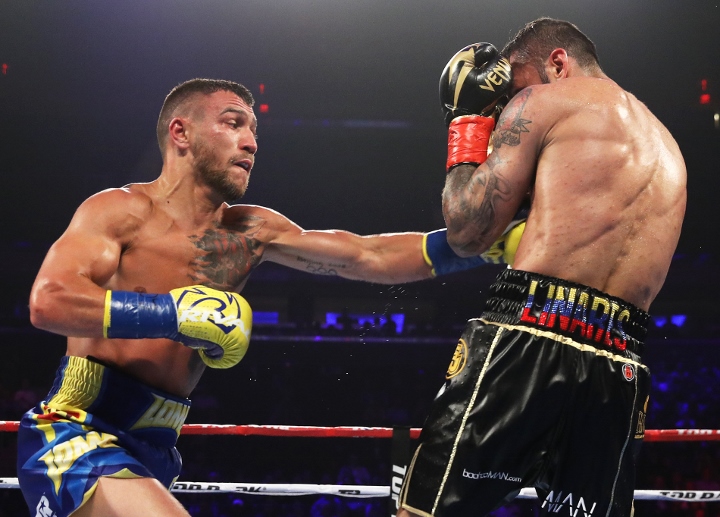 Top Rank’s doubleheader Saturday night began at 8 p.m. ET/5 p.m. PT – right in the middle of prime time on the East Coast, but earlier than usual for boxing broadcasts. It began with welterweight prospect Carlos Adames’ 10-round, unanimous-decision victory over Alejandro Barrera.

While lower than Lomachenko’s last fight, the average rating for Lomachenko-Linares was higher than all but one of Top Rank’s first five ESPN offerings in 2018.

The only Top Rank/ESPN broadcast that lured a higher average audience in 2018 was the card headlined by Oscar Valdez’s victory over Scott Quigg in a WBO featherweight championship match March 10. That telecast from StubHub Center in Carson, California, was watched by an average audience of 1,100,000.

Lomachenko-Linares also ranked No. 3 among all shows on cable television Saturday night, sports and non-sports, in viewers ages 18-49, a coveted demographic for advertisers.

Those that watched Saturday night were treated to a back-and-forth, tactical battle in which both boxers displayed high skill levels and boxing IQs.

That temporarily paralyzing punch sent Linares to one knee. The 32-year-old Linares (44-4, 27 KOs) got to his feet before referee Ricky Gonzalez’s count reached 10, but Gonzalez determined Linares shouldn’t continue and stopped their bout at 2:08 of the 10th round.

The 30-year-old Lomachenko became a world champion in a third weight class in just his 12th professional fight. He took the WBA world lightweight title from Venezuela’s Linares in his debut at 135 pounds.

[QUOTE=Gambino;18777325]Las Vegas was the biggest market for Lomachenko's previous fight. It might not be a big market for other programming but it is for boxing. [url]https://espnmediazone.com/us/press-releases/2017/12/top-rank-espn-vasiliy-lomachenko-vs-guillermo-rigondeaux-second-highest-rated-boxing-telecast-cable-2017/[/url] The hockey game was the top broadcast show in primetime among adults 18-49. It…

[QUOTE=BennyBlanco;18777257]Terrible rating. Down 40% from Loma's last ESPN telecast. More importantly, in basic cable, a 1.0 rating is never something to brag about. By comparison, in the same time slot on the Saturday before (i.e., May 5), ESPN attracted 2.8…

[QUOTE=BennyBlanco;18777271]Las Vegas is not a big TV market - it's the 40th largest tv market in the U.S. - so it has very little impact on national ratings. Moreover, the Golden Knights game attracted only 2.3M viewers, which likely had…

[QUOTE=Gambino;18776983]Vegas being in the NHL playoffs might've had a bigger impact since there was no NBA game at that time. Vegas is a huge tv market for boxing.[/QUOTE] Las Vegas is not a big TV market - it's the 40th…

Terrible rating. Down 40% from Loma's last ESPN telecast. More importantly, in basic cable, a 1.0 rating is never something to brag about. By comparison, in the same time slot on the Saturday before (i.e., May 5), ESPN attracted 2.8…