Lomachenko: I Took Over in The Second Half - I Won The Fight!

Vasiliy Lomachenko does not agree with his upset loss to Teofimo Lopez.

On Saturday night at the MGM Grand's Conference Center in Las Vegas, Lopez pulled off the shocker when he handed Lomachenko his first defeat in six years with a twelve round unanimous decision to unify the IBF, WBC Franchise, WBO and WBA titles. 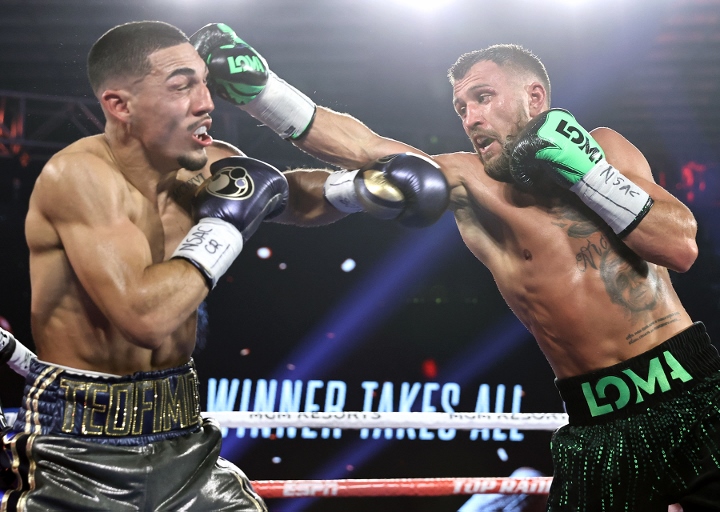 Lopez raised his undefeated record to 16-0 with 12 knockouts, and at 23-years-old he became the youngest fighter to become a four belt undisputed champion. He knocked out Richard Commey in two rounds back in December.

Lomachenko, who dropped to 14-2 with 10 knockouts, was coming off a unanimous decision victory over Luke Campbell last August in London.

He did very little for the first half of the contest, but began to pick up the pace in the seventh round. Lomachenko rallied for most of the second half, with Lopez staging a rally of his own in twelfth.

“I want to go home and see what I can do better. I’m definitely not agreeing with the scorecards. I thought I won the fight, but the results are the results, and I’m not going to argue it right now. Right now, I’ll go home and we’ll discus what I'm going to do next [in the future]."

[QUOTE=Walexhris;20827048]Well said bro.... infact I believe that anyone who had that fight a draw, was scoring based on emotion[B](when you want someone to win so bad, the mind begins to come up with reasons to give them the rounds)[/B] I've…

[QUOTE=TJ highway;20826915]It was a good punch for Loma in the 2nd but not enough to win the round....JMHO.[/QUOTE] Absolutely Bro, Teo did the steady work the whole round and Loma lands a few good shots. I didn’t see enough to…

If you are as popular as mayweather then probably the judges had favor you by 116-112 of that performance but you are not close to floyd as being the boxing cash cow.