Lomachenko: I Don't Know What Happens After I Unify Division

WBA, WBO lightweight champion Vasiliy Lomachenko (13-1, 10 KOs) is taking part in his 15th professional bout on Saturday night, when he faces Luke Campbell at the O2 Arena in London.

The vacant WBC lightweight title will also be at stake. And should he win, he plans to target the IBF title in order to unify the entire division.

"It's one of my goals and dream to put my name in boxing history," Lomachenko said to BBC Sport. "That's why I started a pro career and fought for a world title in my second fight. I'm the fastest three-weight world champion, so I do everything for legacy." 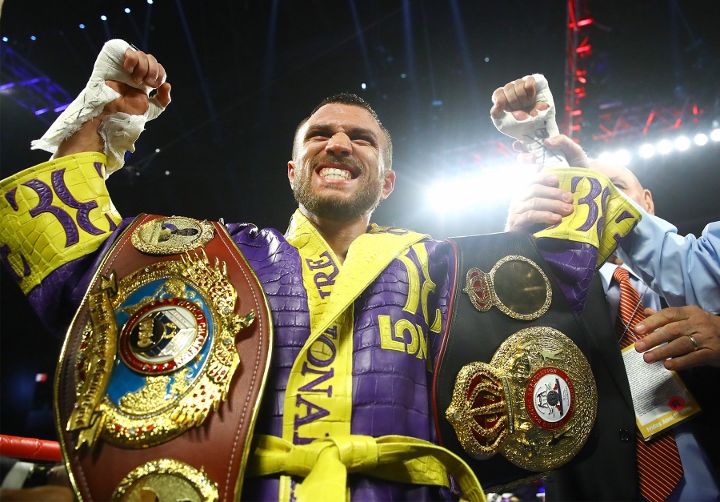 After two 397 amateur contests, two Olympic gold medals and world titles in three weight classes - Lomachenko is not looking to extend his career for too much longer.

If he unifies the entire lightweight division, he could very well retire at that point. Lomachenko has maintained that he's even too small for his current weight class and has no desire to fight at junior welterweight.

The 31-year-old boxer made it clear that he's got zero intention of fighting as long as Manny Pacquiao, who at continues to fight at the highest level at 40-years-old.

"No, I don't want that, it's too much. I have trained since I am four years old. I was born a boxer," Lomachenko said.

"Always, something has to end. I want to hunt, I want to fish every day. Now I can't do this as I train every day. My motivation, my goal, is four titles [at lightweight]. After, I don't know what happens. Now it's two more belts."

Lomachenko is a huge favorite to beat Campbell. Should he come away victorious, the next step would be the winner of the December battle between Richard Commey and Teofimo Lopez, who clash for the IBF title. Top Rank, who promote Lomachenko, would like to see him face the winner of Commey-Lopez in the first quarter of 2020.

[QUOTE=bigjavi973;20022408]I never said you become great by doing that.... I said CHASING greatness.... those are two different things. imo I think he wanted to move up to 140 after the robert easter fight (imo he should have went to 140…

[QUOTE=MMA >>> BOXING;20022405]its not greatness when u get demolished in a complete one sided bout[/QUOTE] I never said you become great by doing that.... I said CHASING greatness.... those are two different things. imo I think he wanted to move…