It wasn’t as easy as his last fight against a British challenger, but Vasiliy Lomachenko eventually out-classed Luke Campbell on Saturday night.

The three-division champion dropped Campbell in the 11th round and easily won a unanimous decision in their 12-round lightweight title fight at a sold-out O2 Arena in London. All three judges – Jean Robert Laine (118-109), Omar Mintun (119-108) and Benoit Roussel (119-108) – scored their battle between southpaws for Ukraine’s Lomachenko by huge margins.

The 31-year-old Lomachenko (14-1, 10 KOs) defended his WBA and WBO lightweight titles. He also won the WBC title, which Mikey Garcia gave up late in April, once he decided his next fight will take place above the lightweight limit of 135 pounds.

Campbell, also 31, was the mandatory challenger for WBC title. The WBC ordered Lomachenko and Campbell to fight for that vacant championship, rather than sanctioning a bout between the No. 1-ranked Campbell and the next highest-rated, available contender.

A game Campbell had his moments, particularly within the first seven rounds, before Lomachenko took control and hurt Campbell several times.

Campbell landed a low blow that caused a brief break just after the halfway point of the 12th round. Lomachenko hurt Campbell to the head and body once the action resumed.

Campbell kept Lomachenko from finishing him by picking up Lomachenko and throwing him to the canvas with just over 40 seconds to go in the fight.

A short left hand by Lomachenko clipped Campbell with about 1:35 remaining in the 11th round. About 30 seconds later, Lomachenko landed a left to Campbell’s body and a short right to Campbell’s head that sent Campbell to the canvas. 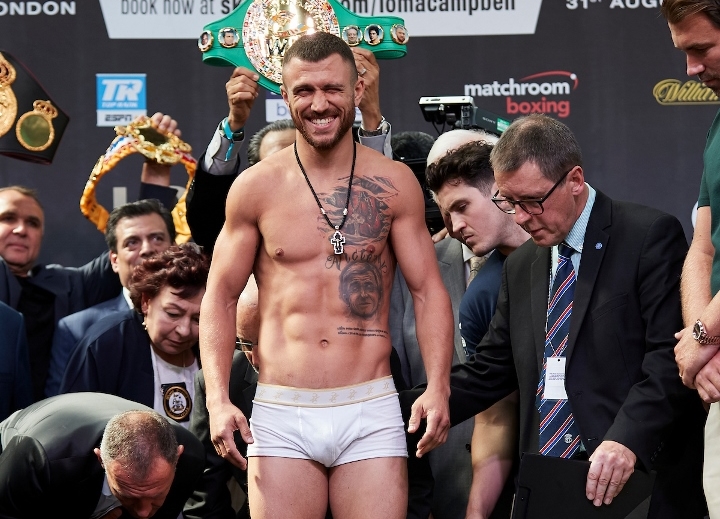 Campbell took a few seconds to recover and answered Loughlin’s count in time. Lomachenko tried to finish him, but Campbell managed to survive until the bell sounded to end the 11th round.

A straight left hand by Lomachenko backed Campbell into the ropes and caused Campbell to hold with about 1:40 to go in the 10th round. Lomachenko knocked Campbell off balance with a stiff jab in the ninth round.

Campbell and Lomachenko traded body shots just before the halfway point of the eighth round. A straight left by Campbell connected with just under 40 seconds to go in the eighth.

A left uppercut by Campbell caught Lomchenko coming in during the final minute of the seventh round. Lomachenko tried to hold Campbell after absorbing that shot.

Lomachenko came back to land hard shots on Campbell in that seventh round, though, and regained control of the fight.

Campbell recovered from a rough final few seconds of the fifth round by steadying himself in the sixth. The challenger landed a right to the body toward the end of the sixth that got Lomachenko’s attention.

Lomachenko followed up with a left to the body and a right to the body, which made Campbell move backward, into the ropes. Campbell covered up as best he could and made it to the bell to end that fifth round.

Lomachenko’s crisp jab snapped back Campbell’s head 1:05 into the fourth round.

Campbell came back to catch Lomachenko with a left uppercut when there were about 35 seconds to go in the third round.

Both boxers were cautious for most of the first round. Campbell landed the best punch of the round when his straight left hit the side of Lomachenko’s head with 13 seconds to go in it.

Lomachenko shook his head to confirm Campbell hit him with a solid shot.

[QUOTE=Satir;20034131]Who remembers now that in Loma-Linares fight Loma's prefight weight was 137 and Linares weighted 152 pds, logically taller and rangier Campbell also rehydrates himself to around 150 or so, not only they have height and reach advantage but they…

Who remembers now that in Loma-Linares fight Loma's prefight weight was 137 and Linares weighted 152 pds, logically taller and rangier Campbell also rehydrates himself to around 150 or so, not only they have height and reach advantage but they…

Campbell is a TOUGH dude. What a warrior! Loma, of course, is the best we've ever seen.

[QUOTE=Main Source;20032718]Oh, look. Another loser basing his "knowledge" from Boxrec. Well, let's debate then and then you can sign out too. Juuko was a highly regarded fighter, probably just behind Mugabe in popularity and ranked highly at the time AND…