Having witnessed first-hand the electric atmosphere for longtime friend Oleksandr Usyk’s knockout of Tony Bellew last November in Manchester, England, Vasiliy Lomachenko instantly decided that his 2019 campaign must feature a big event in the United Kingdom.

His next fight officially became just that.

The Aug. 31 three-belt title unification clash between Lomachenko and England’s Luke Campbell will officially play to a sold-out crowd at London’s O2 Arena. The event was a hot ticket from the moment it was formally announced earlier this summer.

It is now one where any remaining tickets are only available on the secondary market.

“Now officially SOLD OUT for Loma-Campbell,” Eddie Hearn, Campbell’s promoter declared through social media on Monday. “[G]oing to be a big night at The O2 Arena [on] August 31.” 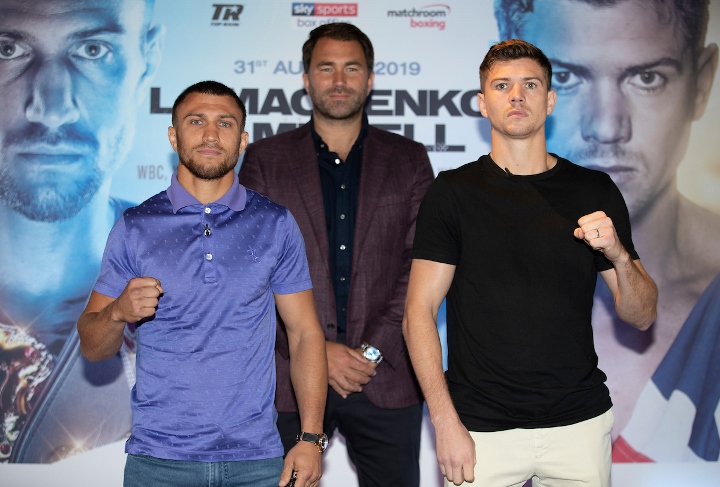 The site—which seats 20,000 at full capacity (though not necessarily the amount of tickets made available)—is a fitting location, as it features a pair of boxers whom captured Olympic Gold in the 2012 London Olympics.

Monday’s announcement is even more relevant to that link, as it comes seven years to the day when Lomachenko (13-1, 10KOs) won the latter of back-to-back Olympic Gold medals after having earned gold and the Val Barker Trophy four years prior as the Most Outstanding Boxer of the 2008 Beijing Olympics.

To date, Lomachenko has enjoyed the far greater pro career of the two, entering as a three-division and reigning unified lightweight titlist. An off-the-canvas knockout win over Jorge Linares last May earned the Ukrainian southpaw the distinction of earning titles in three weight divisions in fewer fights than any other male boxer in history.

The feat has since been matched by Japan’s Kosei Tanaka—just four months later—though Lomachenko remains far more celebrated. He enters the Aug. 31 clash ranked high among the very best boxers in the world on most pound-for-pound lists.

Meanwhile, Campbell remains in search of his first major title. The Hull-bred southpaw came up just short in a competitive 12-round loss to Linares in Sept. 2017. He’s since won three straight, including a landslide decision over Yvan Mendy last September in a rematch where he avenged his first career defeat from nearly two years prior at this very venue.

[QUOTE=Boxingfanatic75;19983270]I’m by far no Hearn fan but that comment lacks any understanding of a Promoter’s job. He gets his fighter a crack at unified titles, sells out the event and gets it in his fighter’s own country. Granted the competition…

[QUOTE=BoxingIsGreat;19983508]Yeah, maybe in the UK. It wouldn't move the needle for me, because I expect more from Loma than beating Campbell. Road warrior doesn't add much credit. Loma is a road warrior in the US, too. Campbell is better than…

The thing about it is, in spite of all Hearns Shinanigans, he can be had. He's bleeding money and pandering. He still has his fangs in Andy, I wonder if Ramirez got away sin mordida.

[QUOTE=landotter;19983429]Loma better take control of this fight early. This crowd will accent anything Campbell does with 20,000 plus roars of approval. If the crowd senses that Lomachenko can be upset, it will be bloody pandemonium. What a great atmosphere. I…

[QUOTE=Corelone;19982312]I will give Loma his credit where it's due. Road warriors are the best of the best to me. His resume is just too short. [B]Take Cambell out[/B], captal K, capital O, [B]in the UK will enhance his profile [/B]some,…