As London gets its first look at a pro version of Vasiliy Lomachenko, so too will the four ring officials assigned to this weekend’s lightweight title fight.

Scotland’s Victor Loughlin has been assigned as the third man for Saturday’s three-belt unification bout between Lomachenko and England’s Luke Campbell (20-2, 16KOs) at the O2 Arena in London, England. Should the bout go to the scorecards, it will land in the hands of Omar Mintun Sr. (Mexico), Benoit Roussell (Canada) and Jean Robert Laine (Monaco/France).

None of the three judges have previously worked bouts involving either participant. Saturday’s main event—which airs live on ESPN+ in the United States and Sky Sports Box Office in the United Kingdom—will mark the first time Loughlin will see Lomachenko (13-1, 10KO) in a work capacity. 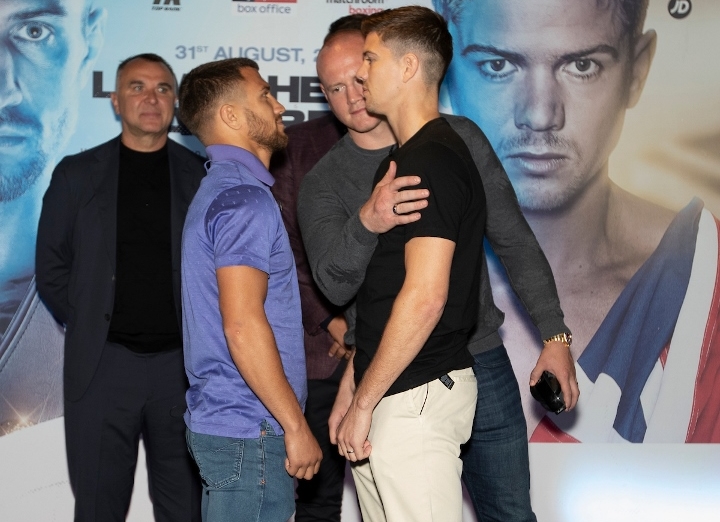 The veteran ring official is far more familiar with the other side of the marquee; Saturday will mark the ninth time Loughlin will work a bout involving Campbell, having served four times each as a referee and judge in eight previous bouts.

Loughlin was the lone judge who had Campbell—a 2012 Olympic Gold medalist—ahead in his previous title bid versus then-lightweight titlist Jorge Linares. The Scottish ring official scored the bout 115-113 in favor of Campbell, who was dropped in the second round en route to losing a split decision. Scores of 114-113 and 115-112 in favor of Linares were far more in line of the viewing public, although most observers acknowledging that it was a tightly contested affair.

Campbell also plied his trade in the presence of Loughlin for each of his two bouts with France’s Yvan Mendy. Loughlin was the referee for their first fight in Dec. 2015, in which Campbell suffered his first career loss in a hard-fought split decision. He gained revenge in a big way, scoring a landslide decision in their rematch last September, which landed the Brit as the mandatory challenger for the now-vacant World Boxing Council (WBC) lightweight title, one of three belts at stake. Loughlin scored the bout 118-111 in favor of Campbell, in in line with consensus scoring for the contest.

The last time Loughlin was the third man for a bout involving Campbell came in the lightweight contender’s 4th round knockout of Derry Mathews in their Oct. 2016 clash.

Of the three judges, Mintun boasts the deepest résumé. The 65-year old judge was part of the ringside panel who had then-unbeaten lightweight titlist Miguel Angel Gonzalez winning a majority decision over Lamar Murphy in an Aug. 1995 clash that most felt was a draw or even a close win for Murphy. Mintun Sr. turned in the widest score of the night, rendering countryman Gonzalez a 117-109 winner in a preliminary bout to the first post-prison appearance of former World heavyweight champion Mike Tyson.

The first-generation official—whose son Omar Jr. is also a licensed boxing judge—was also part of the judging crew who saw Badou Jack and Lucian Bute fight to a majority draw in their April 2016 super middleweight title fight. Mintun was one of two judges who scored the fight 114-114, with most observers believing Jack did enough to deserve the nod—the scoring becoming moot, as the outcome was changed to a DQ win for the defending titlist after Bute tested positive for a banned substance.

Canada’s Roussel has worked primarily in North America but remains well-traveled and experienced in 15 years as a ringside judge. Among his trips to the UK include his working an undercard bout for the May 2014 show at Wembley Stadium which forever remains known as the night Carl Froch called it a career after his repeat stoppage of George Groves in front of 80,000 fans. Roussel’s last venture to jolly old England came in May, when he had Billy Joe Saunders pitching a 12-round shutout over Shefar Isufi in their vacant super middleweight title fight in Stevenage, England.

Monaco’s Laine makes his third trip of the year to the United Kingdom and has worked several cards in the past for Matchroom Boxing, Campbell’s promoter. His most notable assignment in recent years came last September, when he had then-unbeaten heavyweight titlist Anthony Joshua ahead 59-55 in a seemingly closer adventure with Russia’s Alexander Povetkin, whom Joshua knocked out in seven rounds for what would mark his final successful title defense.

Laine’s most recent assignment came in July on a show promoted by Top Rank, for whom Lomachenko has fought since turning pro in 2013. The July card was an easy night’s work for Laine, who was among the ring officials for Ryota Murata’s middleweight title-reclaiming 2nd round knockout of Rob Brant.

[QUOTE=1hourRun;20021049]-B side Bumchenko has no juice going along with Vic Loughlin as the referee. Luke Campbell may leave Bumchenko on Life-Support, like E.U Bum jr. did Nick Blackwell as Loughlin stood by and let Blackwell get pummeled into retirement. This…

[QUOTE=JakeNDaBox;20021430]From my view, bad judging is more of an issue in the US than it is in the UK. Referees seem to be the center of controversy for most good UK ring scandals.[/QUOTE] The ref is the only judge in…

[QUOTE=KidDinamita;20021249]Would be more afraid of judges then the referee, although you never know what they come up with.[/QUOTE] From my view, bad judging is more of an issue in the US than it is in the UK. Referees seem to…

Would be more afraid of judges then the referee, although you never know what they come up with.