Vasiliy Lomachenko is in a no-win situation at this point in his career.

There have been doubters and naysayers of Lomachenko, especially in recent fights. Either the criticism has come from overzealous fight fans or they simply do not like Lomachenko. 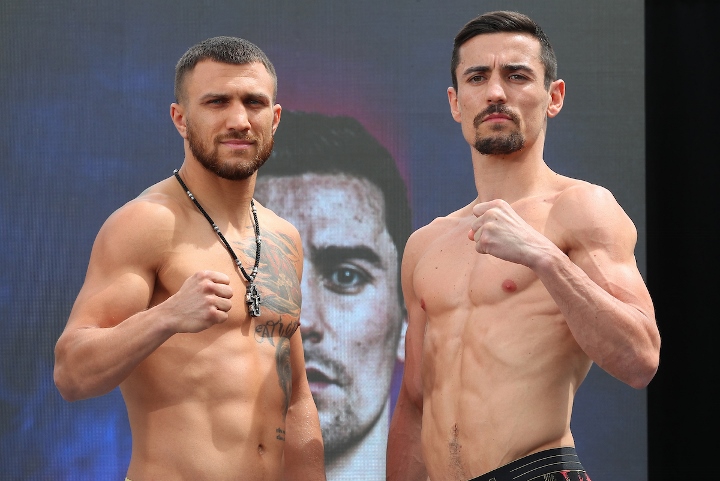 Lomachenko has laughed off the criticism and continues to fight on, as he will tonight against Crolla at Staples Center in Los Angeles. Lomachenko will defend his WBA and WBO world title belts against the Manchester, England fighter (ESPN+, 11 p.m. ET/ 8 p.m. PT).

Lomachenko decided to move up in weight and challenge then-WBA titleholder Jorge Linares on May 12. In one of the better fights of 2018, Lomachenko overcame a knockdown in round six to drop Linares with a left hand to the body and win by knockout in round 11.

In his last bout on Dec. 8, Lomachenko took a while to get going before dominating the second half of the fight, scoring two knockdowns of Jose Pedraza late in the fight to win by decision.

Fight fans are quick to look at Lomachenko’s last two fights through a half-empty glass approach. Lomachenko has faced stronger and bigger fighters at 135 pounds, where these fighters could take a punch and are talented as well. Both Linares and Pedraza have won world title belts, despite now being on the downside of their careers.

While Lomachenko may look more vulnerable in recent fights, he has fought on more even terms, where he has been more willing to engage against fighters like Linares and Pedraza.

Lomachenko may take that approach tonight against Crolla, who despite having 13 knockouts, likes to sit in the pocket and trade. Crolla may be the physically bigger fighter, but it will be interesting to see how well he takes Lomachenko’s punches.

Lomachenko, who is originally from the Ukraine and now resides in the Los Angeles suburb of Camarillo, will want to appease the fans in attendance, many of whom are of Ukrainian descent and live in the Los Angeles area and those who are Latino.

“I anticipate a good and entertaining fight (tonight),” said Lomachenko earlier this week. “I am going to show my best style and give the fans a great show. I am excited to fight at Staples Center. The fans in Los Angeles are special and appreciate my boxing style.”

After the Crolla fight, it does not get easy for Lomachenko, assuming he stays at 135 pounds. There is a potential and unification fight later this year against IBF titleholder Richard Commey.

My talented colleague at Boxingscene, Keith Idec, even penned a story of how a Lomachenko fight against unbeaten Teofimo Lopez would be an option.

However, a majority of boxing fans have clamored for a fight against Mikey Garcia, who suffered his first defeat at the hands of IBF welterweight titleholder Errol Spence on Mar. 16. Lomachenko has stated he is ready for a fight against Garcia, but that it is up to Garcia if he wants that fight.

As has been the case, seeing is believing. A Lomachenko fight against Garcia would be attractive and appealing, especially for Southern California fight fans. Garcia grew up in Oxnard, and now resides in Moreno Valley.

"My goal is to unify all the titles. If it's (IBF champion Richard) Commey later this year, that would be a great fight. Any champion, I would want to fight. I want IBF and WBC belts. I want to go down in history as a great champion."

[QUOTE=Oldskoolg;19653496]The only People excited about this fight are the British[/QUOTE] I'll watch this fight because I'm a boxing fan and Lomachenko is one of the best boxers I've seen. I've been involved in boxing for the last 32 years and…

[QUOTE=Oldskoolg;19653496]The only People excited about this fight are the British[/QUOTE] Wrong! Crolla is a tough boxer with size advantage but Loma is incredibly skillful. I think Loma will defeat Crolla. Should be a good fight thou.﻿ Don't jump to the…

[QUOTE=Oldskoolg;19653496]The only People excited about this fight are the British[/QUOTE] Lol no. Loma is a Top PFP guy. Always excited to see him. Wish it was a better opponent, but Loma fights best avail all the time..that's why hes #1/#2…

The only People excited about this fight are the British

[QUOTE=Madison boxing;19653031]I dont think it will be that bad. Crollas not some bum but the biggest problem is he doesnt even have a punchers chance. I dont think its quite the mismatch its made out to be, crollas fought at…