Vasiliy Lomachenko couldn’t believe what he was reading.

The three-division champion couldn’t resist responding on Instagram upon noticing Devin Haney had predicted late last week that he would knock out Lomachenko if they fought. Lomachenko dismissed Haney’s level of competition and insisted he would fight the unbeaten 21-year-old lightweight while answering questions as part of an interview with broadcaster Crystina Poncher.

“DAZN posted something about Haney, and he said he would knock me out,” Lomachenko explained in a video posted to Top Rank’s YouTube channel. “So that is why I answered him, ‘Hey, listen, are you serious?’ He has not fought anybody and now he is saying he is going to knock me out? I said, ‘No problem. Let’s do it.’

“Then he answered me right away, saying, ‘Yes, we can do it.’ I said, ‘OK, I am ready.’ He knows I am ready. I think he is ready, and we can give the fight for the fans that everybody wants. That is why I mentioned before that this is a very interesting weight class, with big names and good names coming to the weight class.” 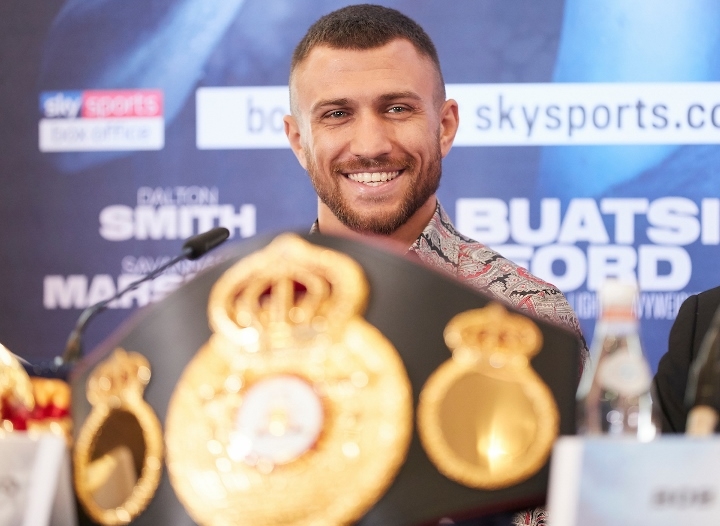 Lomachenko’s exchange with Haney notwithstanding, the Ukrainian southpaw is headed for a showdown with another younger, undefeated lightweight champion later this year.

The 135-pound title unification bout between Lomachenko (14-1, 10 KOs) and Brooklyn’s Teofimo Lopez (15-0, 12 KOs) has been delayed indefinitely due to the COVID-19 pandemic. They tentatively were scheduled to fight for Lomachenko’s WBA and WBO titles and Lopez’s IBF belt May 30 at Madison Square Garden in New York.

The 32-year-old Lomachenko also is the WBC’s franchise champion within the lightweight division. Las Vegas’ Haney (24-0, 15 KOs) is the WBC’s lightweight champion in recess because shoulder surgery in December prevented him from making a mandatory defense of his title against the Dominican Republic’s Javier Fortuna.

Haney has petitioned the WBC to allow him to fight Fortuna next for that sanctioning organization’s vacant 135-pound championship. Fortuna (35-2-1, 24 KOs, 1 NC), the WBC’s top-ranked lightweight contender, and England’s Luke Campbell (20-3, 16 KOs), its second-rated challenger, were scheduled to fight for the vacant WBC lightweight title April 17 at MGM National Harbor in Oxon Hill, Maryland.

Haney has asked the WBC to skip Campbell and order him to fight Fortuna because he will be fully recovered from shoulder surgery by the time boxing matches can be scheduled again.

[QUOTE=Jab jab boom;20521029]I emphasized my original point, and then addressed your point since your reply to me had absolutely nothing to do with my original point. Clearly you're not sharp enough to keep up and 2 subjects are overwhelming for…

[QUOTE=Timur78;20520987]Come down boy. If you want to argue a point, stick to your premise. You just re-framed the argument into whether Haney is/isn't a legitimate threat for Loma.[/QUOTE] I emphasized my original point, and then addressed your point since your…

[QUOTE=Jab jab boom;20517347]no moron....the point is that Loma is being hypocritical to have an issue with Haney (who has been a pro for 5 yrs and has 21 fights)having confidence in himself when Loma himself had 0 pro fights and…

[QUOTE=Timur78;20517254]Loma is an outlier in the boxing industry who fights for greatness. There is a difference. He is a polar opposite to the Mayweather type boxer.[/QUOTE] This is the type of comment that turns a lot of people against Lomachenko…