Lippe-Morrison Drops Polley Five Times, Stops Him in 3rd Round

Trey Lippe Morrison continued his comeback from a hand injury by scoring an easy victory in his home state Saturday night.

Lippe Morrison, the son of late heavyweight champ Tommy Morrison, destroyed journeyman Byron Polley on the Gilberto Ramirez-Roamer Angulo undercard at Chesapeake Energy Arena in Oklahoma City. Tulsa’s Lippe Morrison dropped Polley twice in the first round, once in the second round and twice in the third round before their complete mismatch was stopped in that third round.

Referee Mike England stopped their fight, which was scheduled for eight rounds, at 1:39 of the third round. 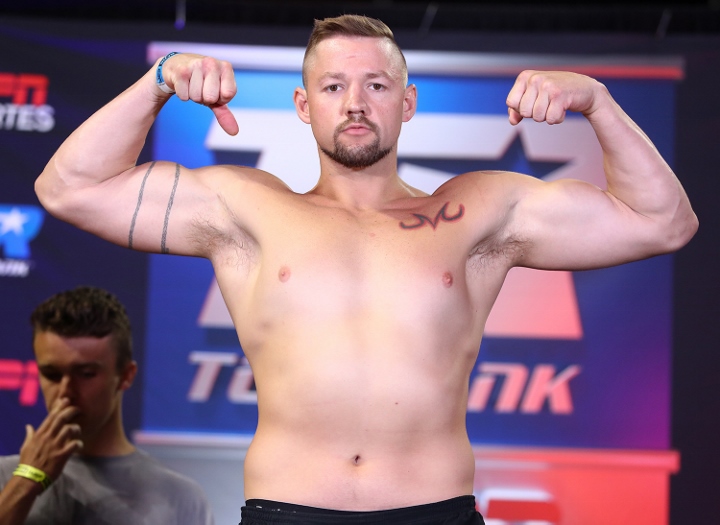 Lippe Morrison, 28, improved to 15-0 and has knocked each of his professional opponents. The 38-year-old Polley, of Saint Joseph, Missouri, fell to 30-23-1 (13 KOs, 1 NC), lost by knockout in a fourth straight fight and suffered the 20th knockout defeat of his 19-year pro career.

Lippe Morrison first floored the out-of-shape Polley just after the midway mark of the first round, when Polley took a knee due to an accumulation of punches. The 276-pound Polley got up, but Lippe Morrison dropped him again with an overhand right that sent Polley to one knee with 18 seconds remaining in the first round.

An overhand right by Lippe Morrison sent Polley to the canvas again with 1:32 to go in the second round.

England immediately halted the action after that fifth knockdown.

Lippe Morrison has won two bouts by technical knockout since ending a 15-month layoff due to a hand injury March 9.

Later Saturday night, Los Angeles’ Mikaela Mayer improved to 6-0 by soundly out-boxing Sheena Kaine in a six-round lightweight fight. Mayer, a 2016 Olympian, dropped Kaine with a perfect overhand right in the second round and won by the same score, 60-53, on all three scorecards.

[QUOTE=nycsmooth;18905260]The entire card tonight is nothing but pure garbage... who are all the suckers paying money to watch this trash???[/QUOTE] ESPN equals trash Fights

He's not going anywhere unfortunately. He has zero defense and is going to be pounded on when he steps up. I think Kingpin Johnson probably beats him right now

The entire card tonight is nothing but pure garbage... who are all the suckers paying money to watch this trash???

If his father was still alive he would send him straight to the gym, he looks very soft and out of shape.