Kudratillo Abdukakhorov and Sergey Lipinets will have to wait a little longer before they fight for the IBF’s interim welterweight title.

BoxingScene.com has confirmed that their 12-round, 147-pound title fight has been postponed from its announced date of October 10. It could be rescheduled for November 28, when Showtime is set to televise another card, but the new date hadn’t been finalized as of Thursday afternoon.

Kazakhstan’s Lipinets revealed in a Tweet posted late Wednesday night that his fight against Abdukakhorov would be postponed.

Abdukakhorov (17-0, 9 KOs), the IBF’s number one contender at 147 pounds, and the third-ranked Lipinets (16-1, 12 KOs) were supposed to headline a Showtime Championship Boxing tripleheader October 10 at Mohegan Sun Arena in Uncasville, Connecticut. The 27-year-old Abdukakhorov, an Uzbekistan native who resides in Malaysia, encountered a visa issue, though, that would’ve prevented him from arriving in the United States in time to participate in required COVID-19 testing for their fight a week from Saturday night. 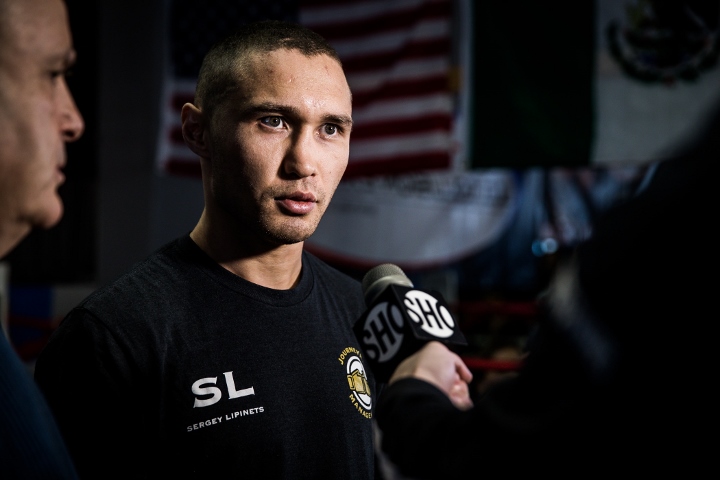 It is unlikely Showtime will move forward with its broadcast October 10. The other two fights it is scheduled to air that night, which were to feature Mayweather Promotions prospects Malik Hawkins and Xavier Martinez, are more likely to be added to other telecasts Showtime has scheduled for later this year.

If Abdukakhorov-Lipinets is added to Showtime’s November 28 telecast, it’ll be packaged with fights featuring Chris Colbert and Richardson Hitchins.

Whenever Abdukakhorov and Lipinets fight, the winner will move into position to face whoever emerges victorious from the Errol Spence Jr.-Danny Garcia bout.

Spence (26-0, 21 KOs), of DeSoto, Texas, will face Philadelphia’s Danny Garcia (36-2, 21 KOs) in a 12-round fight November 21 for Spence’s IBF and WBC welterweight titles. The site of the FOX Pay-Per-View event headlined by Spence and Garcia hasn’t been determined.

They have to check the fighters passport status before they sign for the fight. To make sure that it hasn't expired, and that it'll still be active probably for a month to three months, after the fights scheduled just in…

These Visa issues seem to always happen a week before a fight. Why don't they get this stuff squared away when the fight is announced?

That sucks, good Welterweight fight, winner gets themselves in the mix at 147 and a shot at the IBF Hopefully Abdukakhorov can get that Visa issue straightened out soon

Bit gutted. was looking forward to that one too. It's not a AAA but they're a really well matched pair. I was probably leaning a bit towards Sergei with slightly more top level experience but honestly could go either way.…

Why? Boxing can make it hard to be a fan.