Linares: Where Is Ryan Garcia? Still Playing Online While I'm Training For A Real Fight

Jorge Linares had his fun on social media until it was time to actually fight.

That’s just how he has always prioritized his life, a claim that isn’t necessarily shared by his divisional peers.

The former three-division titlist remains hard at work for his upcoming showdown versus Dominican Republic’s Javier Fortuna (35-2-1, 24KOs), whom Linares will face on August 28 live on DAZN from Fantasy Springs Resort Casino in Indio, California. The fight comes months after having a go on social media with unbeaten lightweights Devin Haney (24-0, 15KOs) and Ryan Garcia (20-0, 17KOs), the latter whom he was originally slated to face in July. 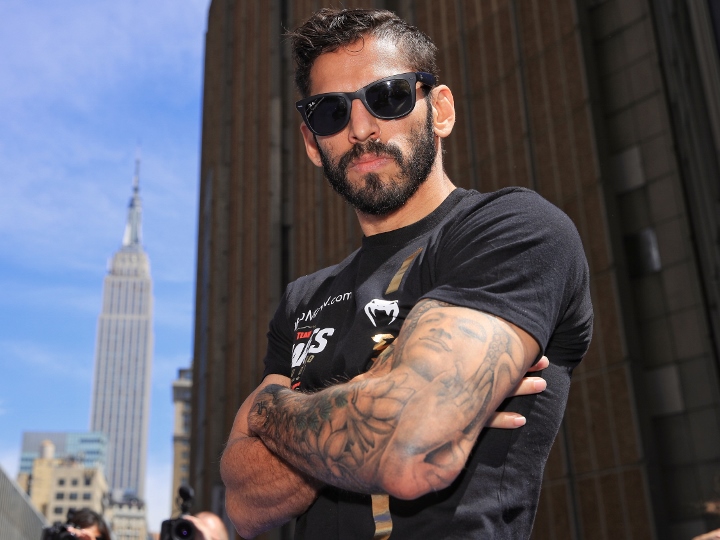 Those plans actually fell apart prior to the start of the ongoing coronavirus pandemic, never quite picking up to where Linares was forced to look elsewhere for his next opportunity in the ring. It was just as well, as the downtime was already getting to him.

“I don’t get it, these boxers are crazy on social media especially during this situation,” Linares (47-5, 29KOs) told BoxingScene.com. “I really don’t like to talk too much shit. I’m a professional, an old school kind of fighter. I like to fight, I don’t like to type.

“I was disappointed when I didn’t get the chance to fight Ryan and found it humorous when he kept contacting me on social media after all that. That’s what he likes to do and many other fighters as well, but that’s not me.”

Linares and Garcia appeared on the same February 14 DAZN show in Anaheim, California, both scoring knockout wins in hopes of setting up a head-on collision. A different course of action has come about, as Linares will now face Fortuna—the current mandatory challenger for Haney’s WBC lightweight title—in a battle of former multi-division titlists, with hopes for the winner to next challenge for the crown.

Garcia carries a similar vision, though traveling a different path. The unbeaten Victorville, California product remains in ongoing negotiations for a WBC interim lightweight title fight versus England’s Luke Campbell (20-3, 16KOs). The winner of such a bout is also expected to challenge for a real title, although talks continue as the deadline looms before heading to a purse bid hearing scheduled for this Friday, August 7.

The fact that Linares was able to finalize terms first and beat Garcia to the ring doesn’t at all surprise the multilingual boxer from Venezuela who now lives in Tokyo, Japan.

“I’ve always felt it’s much better to be quiet and just let your fighting do all the talking for you,” insists Linares, who turns 35 later this month. “Just because we are all locked down, doesn’t mean we have to feel quarantined and resort to fighting online. I’ve been training hard, I don’t need to waste my time.”

“I understand that fighters like Ryan Garcia, like Devin Haney (who is still without a scheduled fight) need to have that [online] presence. They would rather fight on Twitter and Instagram than in the ring. Where are they now, though? Where is Ryan Garcia right now? He’s still playing online while I am hard at work training for a real fight in the ring.

[QUOTE=Griever0730;20691420]Yea. He's still young, but all that talking he does on the gram ain't gonna help GBP's case. He wants big fights and he's publicly calling them out on it, throw him in with the lions & see if he…

[QUOTE=tokon;20691300]If we're right it's a very bad look for Garcia and GBP.[/QUOTE] Yea. He's still young, but all that talking he does on the gram ain't gonna help GBP's case. He wants big fights and he's publicly calling them out…

[QUOTE=Griever0730;20691097]Hope I'm wrong too but Garcia is GBP's future cash cow. Hard to see them let him fight somebody like Campbell this early in his career despite all his big talk. Gotta protect their investment.[/QUOTE] If we're right it's a…

[QUOTE=tokon;20690297]I've never been convinced that Garcia intended to go through with this fight, and still feel he's gonna find a way not to. Hopefully I'm wrong.[/QUOTE] Hope I'm wrong too but Garcia is GBP's future cash cow. Hard to see…

[QUOTE=kidbazooka;20690628]Was it also fantasy when Bum ass Cano ktfo of Linares in 1 rd when it took Loma 10 rds of even fighting? Look obviously we’re not gonna agree all I gotta say is when Ryan destroys this chinny dude…