Linares: First Fight Back I Want Is Rematch With Lomachenko

Jorge Linares has his wish list firm in hand—and it’s loaded with the very best that the lightweight division has to offer.

The former three-division titlist is angling for a third reign at lightweight as soon as his next ring appearance. His last days with a belt around his waist came during the ring walk for his May 2018 stoppage loss to Vasiliy Lomachenko. Their ESPN-televised clash was the most competitive fight for the Ukrainian southpaw, though sadly producing an end to Linares’ 3 ½ year stay atop the lightweight division spread out over two title reigns.

Three wins have come in his last four fights, including a 4th round stoppage of Carlos Morales this past Valentine’s Day in Anaheim, California. The victory came on the same show as Ryan Garcia (20-0, 17KOs) who scored a 1st round knockout of Francisco Fonseca, with designs of matching the winners later this summer. Those plans were put on hold due to the ongoing coronavirus disease (COVID-19) pandemic, with the 34-year old Venezuelan based out of Tokyo, Japan since setting his sights on much bigger game.

“Now I have so many [options] with so many good fighters at this weight. Younger boxers and new talent too,” Linares (47-5, 29KOs) noted in an interview conducted by Nick Libonati and filmed by New Fly Films’ Stefan Newman. 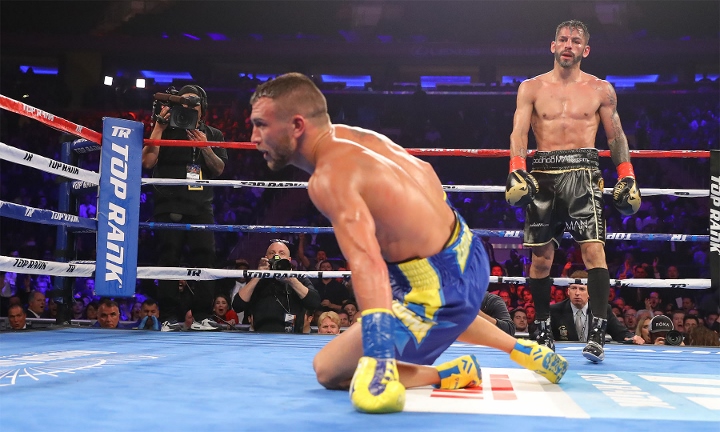 Observing a whiteboard with a list of the division’s reigning titlists, Linares has taken the initiative of mapping out his future. First up—if he gets his way—would be a shot at redemption.

“For me, though, the first one I really want to fight is this one (Lomachenko), the rematch,” insists Linares, who has previously held titles at 126 and 130 before winning the first of two titles at 135 in 2014. “I want that first. Then, this one [unbeaten former two-time 130-pound titlist and current secondary 135-pound titleholder Gervonta Davis]. He’s an amazing boxer. He’s good, he’s strong, he’s fast. After the fight with Gamboa, though, I thought to myself that I have a very good chance to beat him.

“Also this one too (unbeaten two-time WBC titlist Devin Haney) and then we fight this guy, Teofimo Lopez (15-0, 12KOs, current IBF titlist). He’s a strong guy, he’s the new IBF world champion. I’m ready to fight all of the best boxers in the 135-pound division, but now what I really want is that rematch with Vasiliy Lomachenko.”

[QUOTE=NachoMan;20580951]Sorry, but neither Lomachenko nor his most ardent fan can GUARANTEE that he never gets tagged or dropped again - or that he never accidentally steps on his opponent's foot. Such an odd assertion to make.[/QUOTE] True which is why…

[QUOTE=Silver Spear;20579723]My point about the gift is that it will not happen again no matter how hard Linares tries. The KD was valid yes but you can guarantee Loma has learned his lesson and will make sure his foot does…

[QUOTE=NachoMan;20573574]Isn’t all of that irrelevant though? A KD isn’t nullified just because a fighter gets hit while off balance. That was a perfectly clean, perfectly legitimate KD. No gift at all to Linares.[/QUOTE] My point about the gift is that…

[QUOTE=belmondoss;20574988]Dude quit what you smoking, it really affects your brains....[/QUOTE] It's sarcasm.

[QUOTE=Derranged;20573996]Loma is the biggest joke in all of major sports!! Pedraza- ROBBED! Linares- Clear low blow and a slip, the ref should face death by firing squad for being an Uncle Tom! Campbell- ROBBED! Loma can't even beat some Euro…