Lee Selby Rejects Kambosos' Version of What Happened in Their Sparring

The first time Lee Selby saw George Kambosos Jr in person, he was impressed. The Australian has started to grate on him since then but will be out to prove a point when they meet in an eliminator for the IBF lightweight title at Wembley on Saturday.

Selby, the former IBF featherweight champion, sparred four rounds with Kambosos at the Wild Card gym in Hollywood in 2018. It was a session that the Australian says gives him confidence that he has Selby’s number. But while Kambosos says he dominated the sparring session, Selby remembers it differently.

“He looked very good when I watched him sparring, but when I got in there, I picked him off,” Selby said. “I’m as honest as they come. If he rocked me to my boots, like he says, I’d be the first one to say.

“When I watched him sparring, he looked very good, he bloodied the guy’s nose. I thought I had to be on it. When I got in, I boxed brilliantly, completely outboxed him. And then I hear him saying that he has me running around the Wild Card.

“It was only four rounds. I don’t know what he is doing. It’s only sparring. Nothing really stood out.

“He’s a good fighter. His main attribute is his speed. He is fast and aggressive. It should be a good fight.” 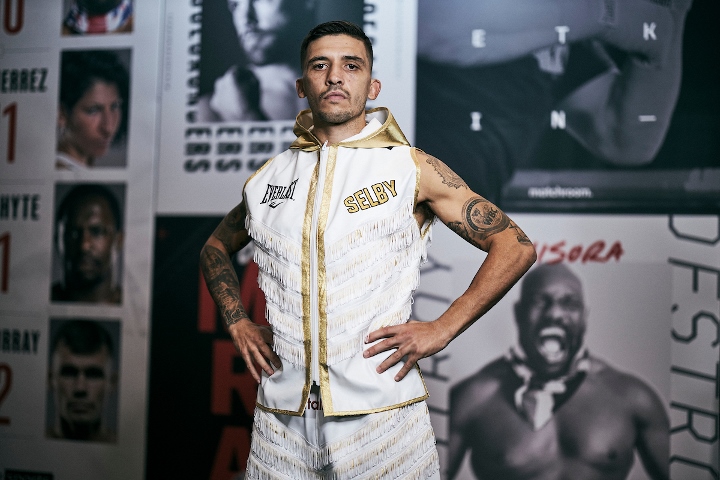 This fight was originally to have taken place in Cardiff in May, with the winner next in line to challenge for the IBF title, the one belt Teofimo Lopez held before his upset win over Vasiliy Lomachenko.

Whether the winner will really get a shot at Lopez now is a slightly moot point, but Selby insists Lopez’s win was not a surprise.

“It wasn’t a massive shock to me,” he said. “Early on I tipped Lopez, but the closer it got to the fight I saw everybody tipping Lomachenko so that changed my opinion.”

He did not waste any of his time off, after training partner Gavin Gwynne, who is also a builder, built him a gym un his home.

“I’ve been training every day,” he said. “A friend of mine, Gavin Gwynne, who is a professional boxer as well as a builder, built me a gym at my house. So, I have been training at my house a lot, going to Newport to train, going to Bristol to train and just the usual stuff, family time and looking after my animals.”

It has been 12 months since he stepped in the ring, however, when he claimed a points win over Ricky Burns and, at 33, he still retains plenty of ambition.

He lose his world title to Josh Warrington in 2018, but never really considered trying his hand at super-featherweight.

“I’d only drop down if it was a world title fight,” he said. “It wouldn’t be easy to make the weight. It is still difficult to make lightweight. How I made weight for so long at featherweight, I don’t know.”

I hope Selby wins...some fighters I like to see lose that zero on their record and I'd like to see Kambosos be one of them.

[B]"To be the first one to be a two-weight world champion (from Wales) would be huge for me.”[/B] Look at that - a Welshman dissing Calzaghe's LHW Ring Magazine title. Wait till Joe finds out :boxing:

His weight drained performance vs Warrington looks better now than it did then. He scraped past Ricky Burns and doesn’t carry much power so he needs a really good performance for this one

It was sparring. It was 4 rounds. No big deal.