Lamont Peterson: It's Been a Long Career, But Today is The Today

Peterson then made a decision to end to his career just minutes after his trainer threw in the towel.

""It's been a long career but today is the day. I love everyone here and I'm always going to support this area, but I'm sure it's time for me to hang it up. I couldn't go out in a better way here at home. This will be the last time you see me in the ring," Peterson said. 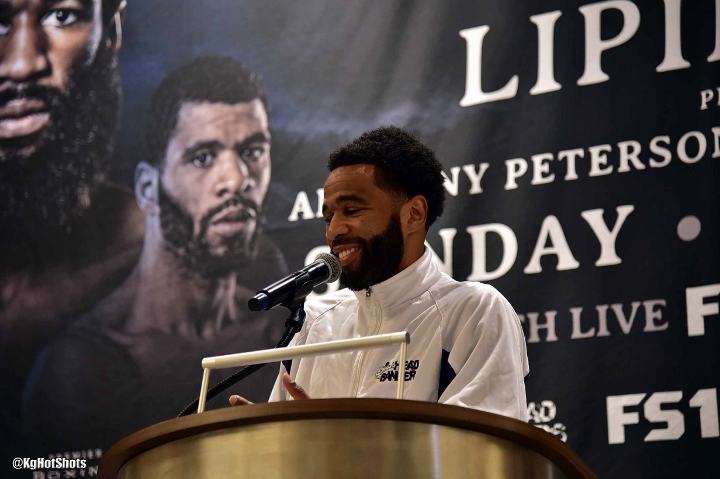 The fight featured near non-stop action and a thrilling finish, already earning Fight of the Year buzz after its' conclusion. Peterson only occasionally retreated in defense for a moment or two while Lipinets was determined to close off the distance, making sure he didn't let Peterson use his reach advantage, while using his own varied attack on the inside to occasional success.

"You can see that I have no problem with the size," said Lipinets. "Peterson is an excellent fighter with unbelievable skills and he's showed me what I can really do."

Peterson was dedicated to attacking the body, punctuating numerous combinations with vicious left hooks to the midsection. He was the busier fighter but was still taking shots from Lipinets' combination of hooks, uppercuts and body shots. Eventually one of those shots appeared to change the tide of the fight, when a straight right from Lipinets connected and clearly hurt Peterson.

The counter put Peterson on his back foot and in survival mode for the final minute of the eighth round until hearing the bell. With the momentum sharply turning toward Lipinets through round nine and midway through round 10, Lipinets finally landed a sweeping left hook during an exchange that hurt Peterson and signaled that the end was near.

When Lamont was on his game he was one of the very best. Sadly, he was either switched on or he wasn't. Loved watching him march Khan and Danny down in those fights. Few fighters can move forward, throw and…

I was always a fan of Lamont. Great technician and always good to watch.

[QUOTE=Pan-Africanist;19614756]I think Sergey is a good not great fighter. I don’t think he will last at 147 with his style. I see 3 maybe 4 more tough fights then he will have some major slippage. I want to see him…

[QUOTE=Kcvtr81;19614222]He was on steroids when he beat khan, the guys a dirty cheat[/QUOTE] I agree. He also got saved by the referee in that fight also.