“If you want to fight, let’s fight. She had all these money demands of $5 million out of the gate when no woman has ever made that much money in women’s boxing. Nobody thinks $5 million is even reasonable because we are women fighters. She’s only made $600,000 as her [highest earning purse in her career] in 21 fights. I’m making $400,000 in my next fight, in just 10 fights,” Shields told BoxingScene.com in an interview. 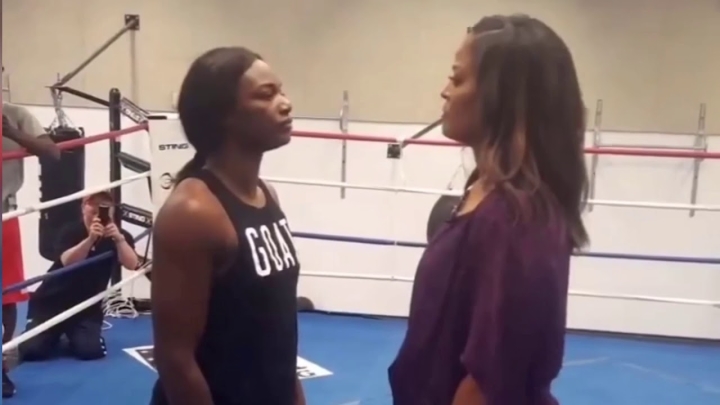 Shields believes the earnings should be split 60/40 in favor of her, but she’s willing to go 50/50 just to not give Ali another reason to say “no” to the fight. Shields made $300,000 in her last fight, a unanimous decision win against Ivana Habazin in January.

She believes a pay per view fight with Ali would net nearly 900,000 buys.

“Then [Ali] says ‘I need a year [to train], I need to make sure my kids have a babysitter for a year,’ and all these other crazy stuff. There are a hundred ways to say ‘no’ and one way to say ‘yes.’ That’s all I’ll say to that,” said Shields.

“But me being fair, and wanting to get the fight made, all she has to do is make an official un-retirement statement and then give us a date for when she’s going to be ready to fight. And then all we have to do is promote, promote, promote, and then we can get in the ring and fight.”

The 25-year-old Shields, who hails from Flint, Michigan, said she’s “kind of over it” in potentially fighting Ali after initial conversations have fizzled since Ali first entertained the idea of fighting Shields in February.

“Do I want to fight her and beat her? Yes. If the fight doesn’t happen, am I going to be mad about it or sad that my career is worth anything? No,” said Shields. “She thinks she’s a bigger name than I am in boxing. She’s not … I’m going to make $1 million with or without Laila Ali. Trust me. The last name Shields can do it.”

Laila Ali asking for 1 year to train at 43 years old is not outrageous at all. That sounds pretty reasonable for some one who has been out of the ring almost 15 years now. Shields is in her prime…

If shields says it’s gonna be 900k ppV buys why not pay Laila 5M? At 60$ a pop that’s 54M revenue from the ppv alone 5M is actually low for those kinds of numbers