Kubrat Pulev Reacts To Criticism For Kissing Reporter in Video

After the fight, he was interviewed by Jennifer Ravalo, a Vegas Sports Daily reporter also known as Jenny Sushe. 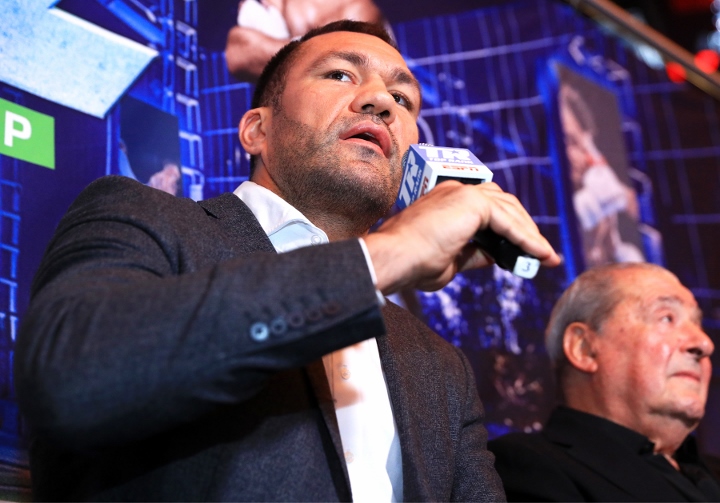 Ravalo asked Pulev whether he should now have the opportunity to fight British boxer Tyson Fury, to which he responded "yes" before putting his hand on her face and kissing her, without her consent.

She laughed off the incident at the time but later described it as "embarassing" and "strange" on Twitter, commenting on a post by a self-described boxing fan from Australia who appeared to find the clip entertaining.

In a post on Instagram on Monday, Pulev defended his actions saying: "You may have seen a clip of me kissing a female reporter following an interview after I won my fight Saturday night. The reporter, Jenny, is actually a friend of mine, and after the interview, I was so elated, I gave her a kiss."

"Later that night, she joined me and my other friends at my post-fight celebration. On the video, after our kiss, we both laughed about it and thanked each other. There really is nothing more to this."

While some social media users appeared to find the incident amusing, others condemned Pulev's actions, saying they constituted sexual harassment, and that he should be banned from the sport.

At the 2017 French Open, French tennis player Maxime Hamou repeatedly kissed journalist Maly Thomas on live television as she tried to get away. Hamou was condemned by the French Tennis Federation and banned from the competition.

"If I hadn't been live on air, I would have punched him," Thomas later told The Huffington Post.

Manou issued an apology statement on Facebook, writing "I offer my deep apologies to Maly Thomas if she feels hurt or shocked by my attitude during her interview".

In Australia, West Indies cricketer Chris Gayle stirred controversy when he invited Network Ten Journalist Mel McLaughlin to a drink during a post-match interview in 2016.

He then said "don't blush baby" to which McLaughlin replied "I'm not blushing."

well there goes that lawsuit

[QUOTE=Redd Foxx;19626140]The fact that you're emotionally distraught by the opinions of guy like me, guys who rarely ever even interact with you, be speaks what a prison your mind must be. [/QUOTE] The Incel movement on Boxingscene is really getting…

[QUOTE=Jubei;19626085]We shall never forget the beta cuck club of NSB, the SJW white knights nobody asked for. Most of them are the usual biased and racist suspects who were cheering for that thot who was trying to totally destroy the…

We shall never forget the beta cuck club of NSB, the SJW white knights nobody asked for. Most of them are the usual biased and racist suspects who were cheering for that thot who was trying to totally destroy the…