On a day where Kubrat Pulev was told his boxing career remains on hold, he at least gets to sit on a knockout win.

The heavyweight contender landed on opposite sides of two unsuccessful appeals heard before the California State Athletic Commission (CSAC) during their bi-monthly agenda hearing Tuesday in Los Angeles. The latter upheld his 7th round knockout win over Bogdan Dinu, although their March 23 clash produced controversy in and out of the ring.

Dinu was floored three times in round seven of their ESPN-televised heavyweight bout in Costa Mesa, Calif. The first of the three knockdowns also saw Pulev land a right hand well after his foe hit the canvas. A mandatory eight-count was administered, after which point Pulev was deducted one point by referee Raul Caiz Jr. 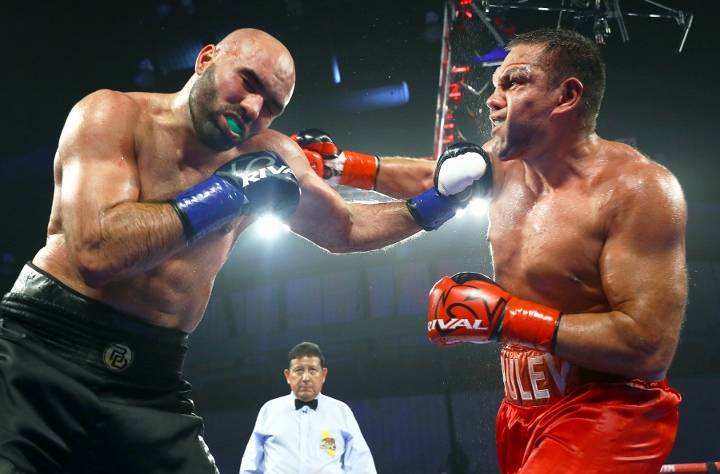 The argument made on behalf of Dinu by his promoter, Greg Cohen—whom filed the protest with the CSAC in April—was that the foul was intentional and that it clearly impacted the heavyweight’s performance from that point until fight’s end.

According to the Association of Boxing Commission (ABC) unified rules, the following applies for intentional fouls:

If an intentional foul causes an injury, and the injury is severe enough to terminate the bout immediately, the boxer causing the injury shall lose by disqualification.

If an intentional foul causes an injury and the bout is allowed to continue, the referee shall notify the authorities and deduct two
(2) points from the boxer who caused the foul. Point deductions for intentional fouls will be mandatory.

None of the three scenarios were applied at the time of the foul, with Pulev deducted one point instead of two. Dinu and Cohen sought through their protest a change in the official outcome to either declare a disqualification or a technical draw (no-contest) as Dinu was down on the scorecards both at the time of the foul and upon the conclusion of the fight.

However, state commissions—despite all falling under the ABC conglomerate—are only obligated to honor the unified rules in the event of a major title at stake. As this was a 10-round bout, the California rules applied which Caiz Jr. followed to the letter as ruled during Tuesday’s hearing.

Pulev (27-1, 14KOs) has won his last seven starts with the latest being upheld through Tuesday’s ruling. However, it was his only courtroom victory of the day as his own filed appeal to have his suspension lifted was denied the same commission.

Shortly after his win over Dinu, Pulev conducted a post-fight interview with online reporter Jenny “SuShe” Ravalo in his makeshift locker room. The awkward interview ended on a strange note, with the heavyweight forcibly kissing Ravalo.

Video of the event went viral, in particular catching the attention of CSAC Executive Director Andy Foster whom immediately suspended Pulev’s license. The incident was considered grounds for administrative suspension in violation of California Code of Regulations, title 4, section 390.

His appeal for reinstatement was denied, as he is now required to once again appear before the commission during its next hearing which will take place July 22. By that time, Pulev will be required to have completed mandatory training addressing sexual harassment, or else he will be subject to a suspension of up to 12 months and fined an additional $2,500.

As the CSAC falls under ABC jurisdiction, Pulev’s suspension is valid throughout North America where he is not permitted to box or train anywhere during such time.

If he weren't coming from a fight, I'd have to think he was drunk.

Pulev is a solid fighter..... However, he will kiss the canvas once he step in with the one and only boogeyman (AJ).

Well said, get on with it!

Lord knows why he did what he did though

[QUOTE=Bonduu;19743766]What he did was pretty dumb, the committee should stop dragging its feet and either dish out a fine or a suspension so this unfortunate event can be forgotten then Pulev can move on...he got a family to feed.[/QUOTE] Agreed.…