Pulev now becomes the IBF's mandatory challenger to unified beltholder Anthony Joshua, who is scheduled to return on April 13 at Wembley in London.

Fury is one fight removed from a twelve round majority decision loss to then WBO champion Joseph Parker. He returned in May and knocked out Sam Sexton in five rounds.

Coming in, Pulev rides on a five fight win streak since getting knocked out by Wladimir Klitschko in five rounds in November 2014. But most of those wins were over boxers who are way beyond their best - like Sam Peter, Kevin Johnson and Maurice Harris. 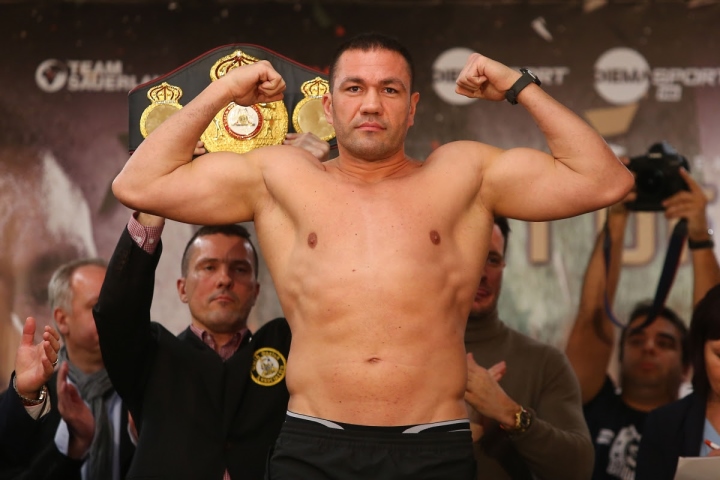 They felt each other out in the first round. There were many jabs being thrown, with Fury using a good jab to create distance between them.

During the second round, a bad cut opened up above the left eyelid of Fury - which Pulev created with a stiff jab. In the third, Fury came charging out and being aggressive with Pulev, who was doing his best to tie him up.

Pulev was the fighter who came out firing his power shots at the start of the fourth. There was a lot of holding as both were looking to gain an advantage with punches up close. In the fifth, Fury was trying to lure Pulev into the corner but he was unable to time him for big shots, with the Bulgarian boxer getting off with shots.

Pulev was throwing and landing a better jab, pushing forward in the sixth round. Pulev continued to push the pace in the seventh and landed a big left hand that Fury took.

During the eight, Pulev was wobbled by a big right hand. He managed to get himself out of trouble by grabbing and holding. Pulev took back control in the ninth, pushing forward and landing the better punches. And the same tempo continued in the tenth, as Pulev was really coming forward and letting his hands go on Fury.

Fury was very tired in the eleventh and mostly stayed on the ropes as Pulev came forward with more punches. Fury couldn't do much in the twelfth. Pulev was the fresher fighter and landing the better punches.

[QUOTE=Shontae De'marc;19228848]The decision was a disgrace! Discrimination! They hate gypsies! That was shades of Muhammad Ali in there by Hughie. I hope they appeal the decision! So angry rite now!!![/QUOTE] You mean Shades of Audley

What an awful fight. Fury look like an amateur swinging wild. ****ty fight. I understand now why the winner would fight AJ.

[QUOTE=HeadBodyBodyBody;19229934][I][/I] yeah no it was from something else, and he says it even more explicitly than he did on rogan[/QUOTE] It's understandable considering how lazy Tyson is. He doesn't like to train to begin with.

[I][/I][QUOTE=Boksfan;19229906]He said it in Joe Rogan experience show.[/QUOTE] yeah no it was from something else, and he says it even more explicitly than he did on rogan