With all of the relevant heavyweight hardware committed to rematches and mandatory defenses, there stands little chance of anyone outside of that scope landing a title shot anytime soon.

In a way, that’s good news for Adam Kownacki even if his current year hasn’t gone according to plan.

The Polish heavyweight hopeful from the Greenpoint section of Brooklyn, New York suffered his first career defeat in his most recent ring adventure, suffering a 4th round stoppage at the hands of Robert Helenius. Their March 7 clash was meant as a placeholder doubling as a hometown showcase, with the bout taking place at Brooklyn’s Barclays Center where Kownacki was a perfect 9-0 heading into the Fox headliner. 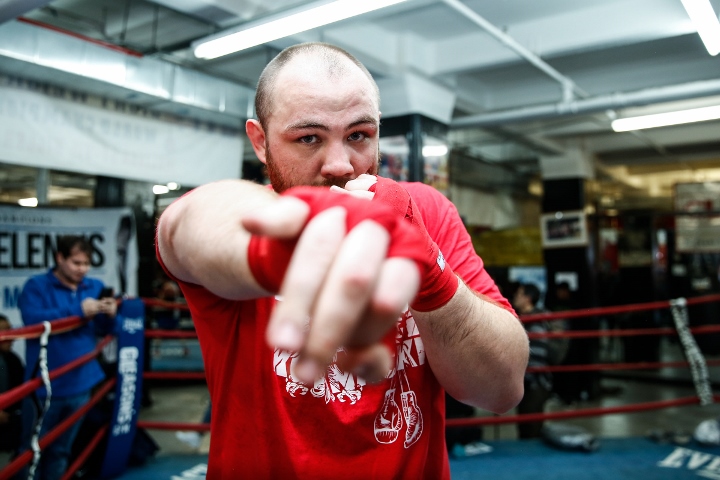 One disastrous turn at the start of round four changed all of that in an instant.

“Boxing is tough (like that). Your whole career is based on your last fight,” Kownacki (20-1, 15KOs) noted during the most recent segment of PBC’s Time Out With Ray Flores on Instagram Live. “I just have to come back stronger, move past this last fight.

“That’s what I’m doing. I have a gym at home. I’m staying in shape, staying focused and preparing to show the world that what happened that night was a mistake that won’t ever happen again.”

Despite the loss, a fighter like Kownacki will always be in high consumer demand. The 31-year old—who relocated to the United States from Lomza, Poland in 1996—is among the more popular attractions under the Premier Boxing Champions (PBC) banner, thanks to his all-action style. It has gotten the job done every time out prior to this March, and even on that night was working up until it didn’t.

Whenever the sport as a whole is able to resume, Kownacki can plan on being thrown right back into the mix. Former heavyweight titlist Andy Ruiz (33-2, 22KOs) remains on the hunt for a big fight following his own setback—a title-losing 12-round decision to Anthony Joshua (23-1, 21KOs) six months after dethroning the Brit to becoming the first-ever Mexican male boxer to win a heavyweight belt.

“Yeah for sure. That’s one of the best fights to make happen,” Kownacki says of the pairing. “It would be good for the fans. Me versus Chris Arreola was a very exciting fight we blew up the record for most punches (Kownacki claimed a points win in their 12-round punch-a-thon last August at Barclays Center). Me and Andy Ruiz will probably do the same if we fight.”

Then of course, there’s also the matter of righting the lone wrong in his career to date.

“I would love a rematch,” insists Kownacki. “I want to show the world that I made a mistake and it won’t happen again. Whatever happens, happens. I’m in good hands with (adviser and PBC creator Al Haymon) and (2019 Manager of the Year) Keith Connolly.

“Whatever they decide is the road I will take. They told me to keep my head up, stay in shape. It was just a bump in the road and come back stronger.”

Quote: Originally Posted by PunchyPotorff "I’m staying in shape" Says the guy who is, like Ruiz, obviously stuffing food in his pie hole with BOTH hands. And rematch Helenius? Why? He never had Robert in any trouble, he himself was…

[QUOTE=JakeTheBoxer;20549130]Kownacki struggled badly with Martin, who is top 20. Struggled badly with Arreola who is not even top 20. And than got stopped by Helenius, who became top 20 by that victory. And now he wants to fight top 10…

Ruiz is probably gonna drag arreola back for one last payday and kownacki would be better served by coming back with a confidence builder against a lower ranking guy. Then fight each other if they both want it. Ruiz wins…

[QUOTE=NORMNEALON;20548051]I mean you would think Ruiz would win for sure , but there are a few things to factor in ...... -what type of shape does ruiz get himself into ?? Kownacki comes in shape always ( not visually per…

[QUOTE=JakeTheBoxer;20549130]Kownacki struggled badly with Martin, who is top 20. Struggled badly with Arreola who is not even top 20. And than got stopped by Helenius, who became top 20 by that victory. And now he wants to fight top 10…