Adam Kownacki is more than willing to grant Lucas Browne his wish.

The Australian heavyweight contender called out Kownacki after knocking out journeyman Julius Long in the third round Friday in Broadbeach, Australia. Now that he has come back from his vicious knockout loss to Dillian Whyte, Browne wants to challenge himself against another contender.

The Polish-born Kownacki (18-0, 14 KOs) inched closer to the title shot he covets September 8. The Brooklyn resident out-worked former IBF champion Charles Martin (25-2-1, 23 KOs) in a highly entertaining, 10-round slugfest and won a unanimous decision by the same score on all three cards (96-94) at Barclays Center in Brooklyn. 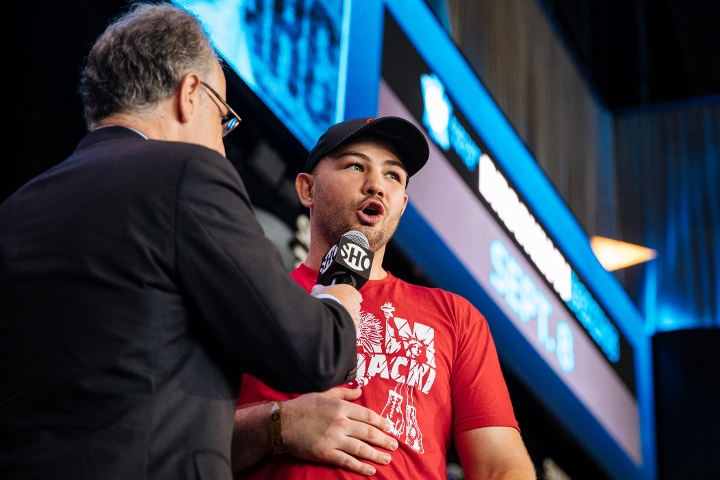 The 29-year-old Kownacki knows their styles could produce another memorable battle if he squares off with Browne, a former WBA world heavyweight champion.

“If Lucas Browne wants to fight, let’s do it,” Kownacki told BoxingScene.com. “I never back down from a challenge. He was the WBA regular champion. So putting another ex-champion on my resume will be another step in the right direction to becoming the first Polish heavyweight champion in history. If we fight, it would be a devastating knockout in the first half of the fight.”

“I’d love to fight Adam Kownacki over in the States, in front of his supporters,” Browne said after defeating Long. “It would be a fan-friendly fight, so you can count me in for that.”

Browne beat Long (18-21, 14 KOs, 1 NC) in his first fight in the sixth months since Whyte knocked him out. Kownacki expects to return to the ring either in December or January.

Kownacki would dispatch of Browne

Browne is too slow for Kownacki. Kownacki TKO 5

[QUOTE=joe strong;19157573]Leapai & Rhino before he gets creamed by Kownacki...[/QUOTE] I agree. Browne sucks. He needs to milk all the money he can from trying to prove he's the 2nd best heavyweight from that part of the world and retire.…