Kownacki: I Want Helenius Rematch - If Not, Then Ruiz, Ortiz or Even Wilder

Adam Kownacki doesn’t dodge any questions about the first loss of his professional boxing career. In fact, he answers them before you even get a chance to ask.

And though the 31-year-old could talk about maybe getting a quick hook from referee David Fields in his March 7 headliner against Robert Helenius, overlooking his underdog opponent, being overwhelmed by the media and fan obligations that went along with being the main event in his hometown of Brooklyn, or even being less than focused because he and his wife had just welcomed a son into the world a few months earlier, he doesn’t do any of that. In fact, there are no excuses at all.

“I just got caught with a good shot,” he said of the short right hand that put him on the deck in the fourth round of the heavyweight bout at Barclays Center. Fields ruled it a slip, but Kownacki admits it was more than that.

“It wasn't ruled as a knockdown, which it was, and it buzzed me a little bit,” he recalls. “And with your pride and ego hurt you want to get him back. But with me being buzzed, he caught me with another good two shots, put me on my ass, I got back up and then he just let his hands go. Looking back at it now, I wish the referee let it continue and let me go out on my back, but the referee's there to do a job and I guess it was the right call. He saw me hurt and he called it right. I'm healthy and I can fight again soon. If he did let it continue and I was laid out, it would have been worse and I might have been hurt.” 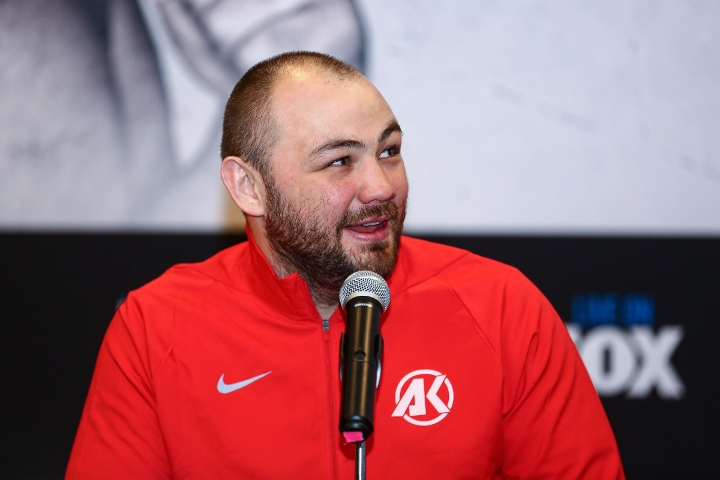 At 1:08 of the fourth round, Kownacki’s 20-0 record turned to 20-1, and it was the Sweden native moving into position to challenge for Anthony Joshua’s WBA title, not Kownacki. It was a costly defeat, but being a heavyweight, defeats don’t cost as much as they might in other weight classes. In other words, a couple wins and Kownacki is back in the mix. He could even be fighting for a title next if the WBA forces Joshua’s hand on fighting Helenius, Joshua balks and gives up the belt and “The Nordic Nightmare” and Kownacki do it again, this time for a vacant title.

Stranger things have happened, but with the COVID-19 pandemic still keeping much of the boxing world on hold, Kownacki has simply taken the time after the Helenius fight to spend time with his family and keep them safe while staying in shape in case the phone rings. And while much has been made of Kownacki’s weight over the years, with such talk ramping up again after he lost, he’s let go of listening to the naysayers, choosing to listen to his body instead.

“Definitely after the last fight I want to make sure my weight is down,” he said. “It's always a topic of conversation, which sucks because I don't think that really defines how I'll perform. But I really want to get to a certain weight. With Arreola I was a little bit heavier. I weighed in less, but I cut a lot of water weight just to make sure it was lower than it actually was. This fight, I did it more naturally, I didn't really starve myself or do a weight cut - it was my natural weight. And now I'm keeping it around the same weight, making sure that when I fight again later this year or early next year that it won't be a topic of conversation and I'll be able to focus on the fight and not losing the weight in camp. It sucks (to hear about his weight) because I know I do the right stuff. This fight too, I was in great shape.”

He got caught. It happens when the big boys of boxing are throwing bombs, and in March, Kownacki was the nail and not the hammer. There’s no shame in that, especially considering that in the history of the heavyweight division, the only elite fighter to make it out with an “0” in his loss column was Rocky Marciano. Don’t tell that to the internet, though. To them, it’s open season on anyone who doesn’t live up to their impossible expectations.

“Luckily, I have a lot of people backing me and saying that it was all right, so I tried to focus on the positive stuff,” said Kownacki of the aftermath of the Helenius fight. “It's boxing and I feel all these negative fans should actually join a boxing gym and see how easy it is. Everybody likes to talk, but if they did it, they'd probably never do it again because it's a very tough sport we're in, especially the heavyweight division, where one punch changes everything. It sucks, but you take it as a lesson.”

There were a lot of lessons for Kownacki to take away, and he hopes the next time he steps between the ropes he’ll get to implement them against the man who beat him.

“Obviously, I want a rematch,” he said. “And I think it might happen. Even though this was a WBA eliminator, I don't think he's gonna get a shot at Joshua anytime soon because Joshua is trying to have bigger fights first and he might give away the WBA title, so I think the rematch will probably happen. And that's the fight I want. I want to make sure it was a mistake. Lennox Lewis avenged his losses, so I want to avenge mine too, and hopefully I'll get that shot. If not, I just want to fight the best and make the best fights happen. If it's Andy Ruiz, Luis Ortiz or even Deontay Wilder, Tyson Fury or Anthony Joshua, those are the guys I want to fight right now.”

In the meantime, the heavyweight contender from Poland embraces the time with his wife Justyna and 10-month old Kazimierz, who is growing faster than dad can keep up with him.

“We had gone upstate when he was six months old and he wasn't crawling, he wasn't doing anything,” said Kownacki. “Now, we went upstate a couple weeks ago and he was crawling and he was like a totally different person already. (Laughs) Watching him grow is truly amazing. He's all over the place and you can't take your eyes off him because he's doing something, climbing the stairs and the beds, putting remote controls everywhere. It's fun. And everybody loves him. It's been great.”

Kownacki is a relic from the Ruiz-era when people thought being chubby actually helped you. But then Joshua showed you don't actually need to fight these fat guys - you just can just run away for 12 rounds. Sadly Ruiz…

Kownacki and Ortiz are about the same level, anything can happen. Ruiz beats Kownacki. Wilder murders him.

[QUOTE=VatoMulatto;20652505]Ortiz would beat him comfortably. I have no idea what people see in Kownacki. Some people do overrate Ortiz too but he's at least a skillful boxer.[/QUOTE] Not sure he beats him comfortably cuz Ortiz is closer to 50 than…

[QUOTE=Squ□redCircle34;20651009]Ortiz vs Kownacki is such a good style match up and either one of them has a shot since Kownacki has no defense and Ortiz is much older and has been stopped twice! Make it happen PBC/Fox[/QUOTE] Ortiz would beat…

I've never understood any of the Kowanaki hype. To me he's an obese light heavy that throws dabs all night. He's C class & his laat 3 fight's have really exposed that.