NEW YORK – Jermall Charlo expressed respect for Matt Korobov as they sat next to one another Thursday during a press conference in Brooklyn.

Charlo clearly realizes that Korobov gave him a difficult fight last December 22 at nearby Barclays Center. Korobov took that bout on less than a week’s notice after an adverse finding in a performance-enhancing drug test eliminated Willie Monroe Jr., Charlo’s original opponent, from their fight.

Korobov would love nothing more than a second shot at Charlo, this time with the benefit of a full training camp to prepare for the unbeaten Houston native. Charlo and Korobov must win their respective middleweight title fights Saturday night at Barclays Center for that rematch to remain a meaningful fight in 2020. 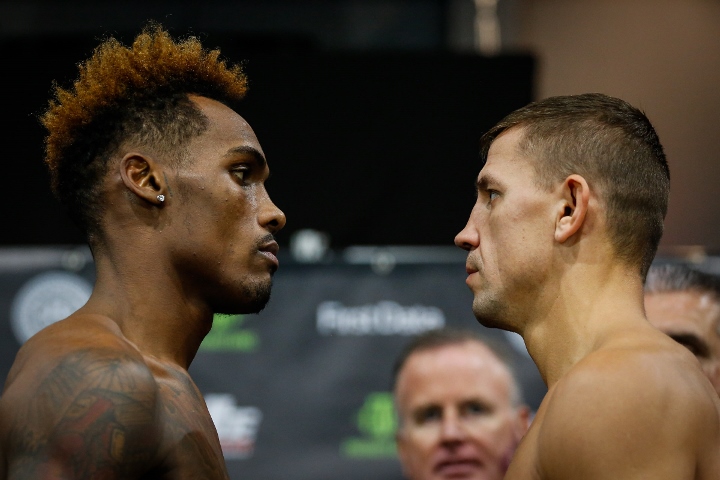 “Charlo hasn’t been too eager to give Korobov another opportunity,” Mike Borao, who co-manages Korobov along with retired heavyweight Jameel McCline, told BoxingScene.com. “A victory over Eubank Jr. will add public pressure for Charlo to finally accept the rematch.”

A possible Charlo-Eubank bout has generated some interest among boxing fans. Korobov hopes to pull off what would be considered a mild upset to spark interest in a rematch with Charlo, who won their fight on all three scorecards (116-112, 116-112, 119-108).

“I hope he fights me again,” Korobov said. “He should. I hope to get the second chance. It really makes sense for his team and for mine. We’re both PBC fighters, so in every way it makes sense to make this fight. I think all the fans would be happy to see that fight again.”

Meanwhile, Borao believes Korobov is in perfect position to ruin Eubank’s debut in the United States.

“Anthony Joshua had the worst night of his life recently and found out fighting overseas is risky,” Borao said, referring to Joshua’s stunning technical-knockout loss to Andy Ruiz Jr. six months ago. “The food, the air, the crowd, the atmosphere, everything, it all feels a bit off. Fighting for the first time in the United States, in addition to fighting at 160 pounds for the first time in a few years, those are big negatives for Eubank Jr. going into this fight against one of the most highly skilled boxers in the world.”

Showtime will air Charlo-Hogan and Eubank-Korobov as part of a tripleheader.

[QUOTE=Satir;20233162]You are fighting for the wba interim so why are you bringing up wbc champ Charlo, why don't you talk about your future as a wba contender and your future wba belt champ fights, don't understand that, what has Charlo…

Eubank will destroy Korobov. He's the better fighter and he's been fighting at a higher weight. Korobov needs to be thinking about which bum he will fight for his comeback fight.

[QUOTE=Satir;20233162]You are fighting for the wba interim so why are you bringing up wbc champ Charlo, why don't you talk about your future as a wba contender and your future wba belt champ fights, don't understand that, what has Charlo…

I used to root for Eubank Jr because I really thought that his athleticism could have taken him places, but I see Korobov beating him.

You are fighting for the wba interim so why are you bringing up wbc champ Charlo, why don't you talk about your future as a wba contender and your future wba belt champ fights, don't understand that, what has Charlo…