Mike Borao and Jameel McCline couldn’t believe what they were told when an official from the Virginia Boxing & Wrestling Commission came to Matt Korobov’s locker room Saturday night.

Korobov’s co-managers made a bee line for ringside once they learned that the result of Korobov’s bout with Immanuwel Aleem had been changed from a majority-decision victory for Korobov to a majority draw. The best explanation anyone from Virginia’s commission could give them was that they made a mathematical mistake while adding up the scores following a 10-round middleweight match Korobov seemingly won. 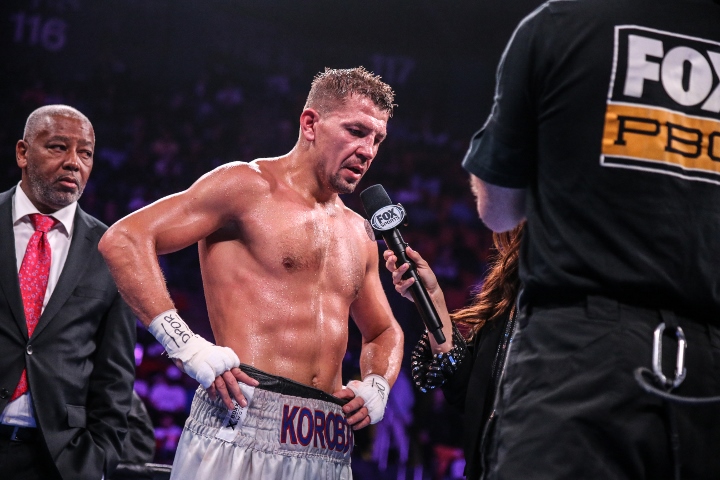 It was later revealed during FOX’s broadcast from Fairfax, Virginia, that D’Attilio actually scored it 95-95. That change rendered their fight a majority draw.

“It’s very difficult to beat a young, determined opponent and incompetent officials,” Borao told BoxingScene.com. “I didn’t watch a replay yet, but it looked like they missed a knockdown early [for Korobov]. And Matt clearly won the first six, seven rounds, in my opinion. PBC and FOX have been great to Korobov, and I don’t think that’ll change based on this result being changed. Matt will be back on FOX in no time, hopefully in another world title fight. Matt has earned a big payday.”

CompuBox credited Korobov with landing 35 more punches overall than Aleem (154-of-417 to 119-of-630). Korobov also hurt Aleem badly by landing a left hand in the sixth round at EagleBank Arena, on the campus of George Mason University.

Korobov was very competitive with WBC interim middleweight champ Jermall Charlo in their December 22 bout at Barclays Center in Brooklyn. Judge Larry Hazzard Jr. somehow scored that 12-rounder 119-108 for Houston’s Charlo (28-0, 21 KOs), who won by the same score, 116-112, on the cards of Max DeLuca and Steve Weisfeld.

[QUOTE=theface07;19742128]You're just making excuses because you are a bias fan who doesn't like non-black, non-American boxers. If the shoe was on the other foot I'm willing to bet you'd be crying blue murder.[/QUOTE] Not really. Sorry man. Usyk, Katie Taylor,…

[QUOTE=BoxingIsGreat;19741094]People might start questioning why Korobov is making them fights so close for judges to score against him. You can't cry foul all the time. Time to look in![/QUOTE] You're just making excuses because you are a bias fan who…

[QUOTE=kidaguilar;19739475]You mean corrupt not incompetent.[/QUOTE] I think that's more accurate. I mean a lot of these judges are veterans and if they can't score a fight accurately by now, they shouldn't be in the business. It just doesn't make sense…

People might start questioning why Korobov is making them fights so close for judges to score against him. You can't cry foul all the time. Time to look in!

FFS can we at least get judges who can add twelve numbers!? or know how to use a hand calculator? :/