Klitschko's Trainer: Wilder Did Not Get Knocked Out, He Did Get Dropped

Johnathon Banks, who took over the training duties of former heavyweight king Wladimir Klitschko after Emanuel Steward passed away in 2012, has denied a recent claim that Deontay Wilder was knocked out during a sparring session with Klitschko.

In a recent interview with Sky Sports, top rated heavyweight contender Dillian Whyte, who Klitschko also used as a sparring partner, claimed to have witnessed a sparring session where the former unified champion knocked Wilder out cold.

"I've seen him getting knocked out," Whyte told Sky Sports. "Wladimir knocked him out. It wasn't no knockdown, he was knocked cold. Properly twitching as well. That's why they probably didn't want him to fight Wlad, because Wlad was going to fight him as a pro and Wilder never fancied it the whole time." 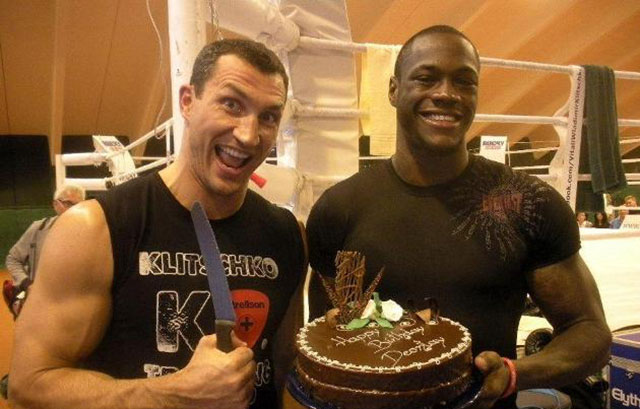 Banks personally secured Wilder for the training camp in question - and denies Wilder was knocked out.

However, he does confirm that Klitschko dropped Wilder during sparring.

"I'm the one who picked Wilder and all the other sparring partners to come," Banks said to ThaBoxingVoice .

"Did Wilder get knocked out cold in sparring by Wladimir? No, that's the truth it didn't happen. Did he get dropped? Yes he did."

Whyte is the mandatory challenger to Wilder's WBC world title.

Wilder is scheduled to defend his title against Tyson Fury on February 22 at the MGM Grand in Las Vegas. There is a rematch clause that would see a third fight in 2020 - regardless of the outcome of the second meeting. They fought to a controversial split draw in the first meeting in December 2018.

The winner of those fights must make a mandatory defense against Whyte, who holds the WBC's interim-title, by February of 2021. Whyte is targeting a ring return on a date in April.

[QUOTE=Mrsantiago;20352476]Also if you re read you will see the word intent as well as some other points you miss by just skimming through in order to push your agenda.[/QUOTE] That article names Frank Warren as Wlad's promoter, and you expect…

[QUOTE=kafkod;20351480]Here's another quote from the article you linked to: [I]"Wladimir Klitschko is intent on defending his world heavyweight titles in the UK against Tyson Fury in September or October, according to his American adviser Shelly Finkel [B][I]and promoter Frank Warren[/I][/B].…

[QUOTE=kafkod;20351480]Here's another quote from the article you linked to: [I]"Wladimir Klitschko is intent on defending his world heavyweight titles in the UK against Tyson Fury in September or October, according to his American adviser Shelly Finkel [B][I]and promoter Frank Warren[/I][/B].…

[QUOTE=Fire4231;20349626]Great point Mrsantiago, problem is Robby Barrett just started watching boxing two years ago. He never saw the Steve Cunningham fight. And you took it easy on Fury calling it a rabbit punch. The ref was literally allowing him to…

[QUOTE=Mrsantiago;20348845]Well this also happened in 2015 so stop with the bulll*****. Fresh off his win against tough American boxer, Bryant Jennings, a fighter very familiar to boxing fans, Klitschko's advisor, Shelly Finkel stated of Fury, "There's a very good chance…