As previously reported on BoxingScene.com, Amir Khan is not ready to walk away from boxing after Saturday's painful defeat to WBO welterweight king Terence Crawford.

Former unified light-welterweight champion Khan was a heavy underdog heading into the New York showdown with the pound-for-pound ranked Crawford in New York.

After being sent to the canvas in the first round, Khan was comfortably behind on all three judges' scorecards when the undefeated champion caught him with a low blow. 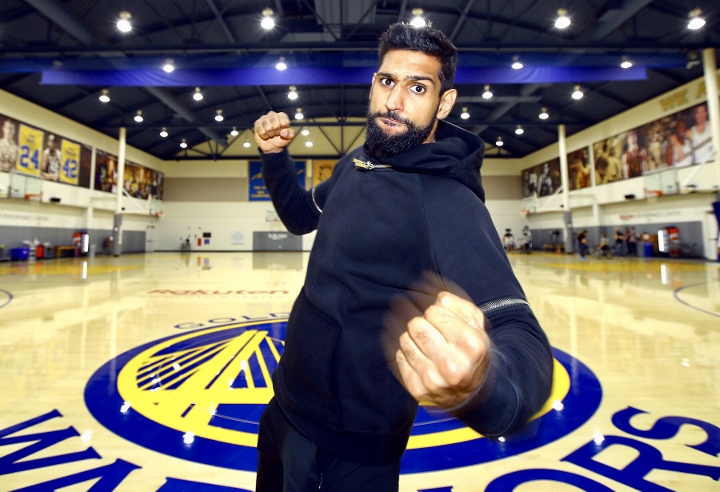 Despite being given time to recover, following discussions with trainer Virgil Hunter, it was decided Khan could not continue and Crawford was awarded a TKO victory amid boos from the Madison Square Garden crowd.

The 32-year-old emphatically told Crawford he had hit him "in the balls" when his heart was called into question at a post-fight news conference and Khan insists his fighting spirit means he cannot go out on such a disappointing note.

"I don't want to end my career like that," said the 2004 Olympic silver medallist, as quoted by the Independent. "I definitely don't.

"I'm one of those fighters, I'd rather get knocked out. I couldn't think straight when I was hit with a shot like that. There were other low blows in the fight. I don't know if it was a strategy. I remember telling the referee before the fight in the changing rooms that he is going to throw low blows. I've seen that in fights, plus he has his cup very high."

Khan's professional record now stands at 33 wins and five defeats, with three of the other losses coming by way of devastating knockouts against Breidis Prescott, Danny Garcia and Saul 'Canelo' Alvarez.

Khan feels confident that there are still several other fights for him in the welterweight division.

"One thing about America, I'll always get opportunities here because I train here and there are many fights out there for me," Khan said.

"There are rematches with [Danny] Garcia, people will still want to see me fight people like [Keith] Thurman and [Manny] Pacquiao."

I'm just here for the reading material in the comments

Lol this kunt is doin it on purpose now, turning into that YouTube bum “Amir zelenoff” what a total kockrash.

He looked completely shot and then quit during the fight after trying to fake a injury to get Crawford disqualified. lol Fans were killing crawford for fighting you laughing at Khan saying he didn't even deserve this fight and he…

eh LoL no they dont! ^^ khans nickname should be homer simpson, even homer is not that dumb tho

No Amir, your dog and pony show has run its course. At some point everyone is yesterday’s news. This is your yesterday. Enjoy your retirement. Try doing something else.