Amir Khan is heavily leaning in the direction of Manny Pacquiao to come away with the victory on Saturday night, when he challenges WBA welterweight champion Keith Thurman at the MGM Grand in Las Vegas.

Khan and Pacquiao are former training partners, several years ago when the two boxers were both trained by Freddie Roach. Khan parted ways with Roach in 2012, while Pacquiao is still under his care.

Pacquiao, even at 40-years-old, is a slight betting favorite to win the fight. 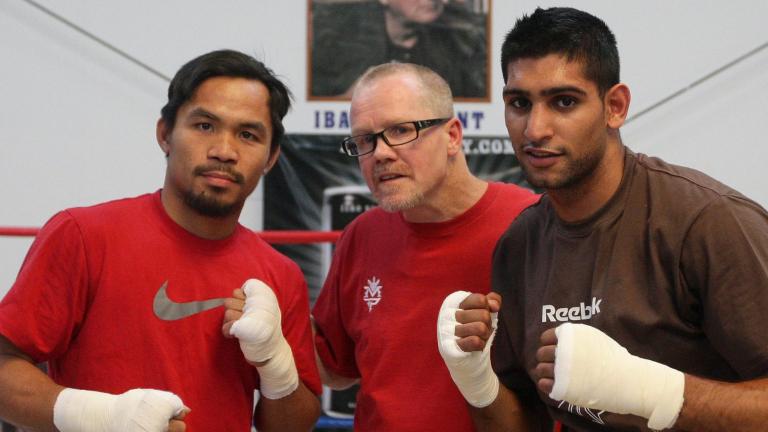 Khan was in action last week in Jeddah, and blew away Billy Dib in three rounds.

Afterwards he called for a future fight Pacquiao, hopefully at the end of the year in Saudi Arabia.

But before they can get there, Pacquiao must come away with a victory when he faces Thurman, who is 10 years younger, undefeated, and has good power and boxing ability.

Based on the overall factors, he sees Pacquiao coming away with the win.

Khan told ITV Boxing : "So the Pacquiao-Thurman fight, I think I favour more towards Pacquiao. Because Pacquiao has fought better opposition, he's got the speed and the movement.

"He's a southpaw, I don't know how Thurman's going to do against a southpaw. Thurman's last fight wasn't the best. I mean he did have a very tough fight against Joselito Lopez and it didn't look the best, he obviously had that shoulder injury and had been out the ring for a long time.

"I favour Pacquaio because he's been more active, and at the same time he's been in with bigger and better opposition. I lean more towards Pacquaio, but Thurman's got the power and the strength to hurt Pacquiao so let's see if he can do that. I just don't think he'll get to Pacquiao."

[QUOTE=Ca$ual Fan;19904085]If Manny wins against Keith, Khan's not gonna get him. Only when Manny loses and he will still have to beg even then.[/QUOTE] That is completely fair and freaking 100% true.

Ok, you have a point.

[QUOTE=JakeTheBoxer;19904147]No way Pac fights Khan next if he beats Thurman.[/QUOTE] Amir Khan says he and Pacquiao have already discussed a fight in Saudi Arabia on November 8th. Khan makes sense for Pac, whether he wins or loses against Thurman. I…

Wouldn’t put too much weight on the Lopez fight. See that analogy being thrown around way too much. Hope PAC is ready for a optimized Thurman? We all know Keith thought he had an easy KO with Josesito. It was…

They have done a great job hyping this fight. Hell, even most of the so called experts are picking Pacquiao to win. smh I'm still picking Thurman by TKO or KO before round 10. This isn't the Pacquiao of 10…