NEW YORK – Nothing about what Amir Khan encountered Wednesday intimidated him.

The former IBF/WBA 140-pound champion has been a mainstream star in his native England for 14 years. He also has fought a long list of noteworthy champions and former champions – Canelo Alvarez, Marco Antonio Barrera, Danny Garcia, Zab Judah, Marcos Maidana, Paulie Malignaggi and Lamont Peterson among them.

Khan acknowledged Terence Crawford’s greatness following a press conference Wednesday at Madison Square Garden, where they’ll fight Saturday night. The 2004 Olympic silver medalist made it clear, though, that he’s not here just to collect a $5 million check for challenging arguably the best boxer in the world.

“I’ve been in bigger fights, against bigger names as well,” Khan told BoxingScene.com. “This is just another day at the office. I’m gonna be very smart and focused for this fight. I know he’s dangerous, but only I can make him the big name he wants to be. You know, because at the end of the day, it’s whether I let him. And I’m not gonna let him.” 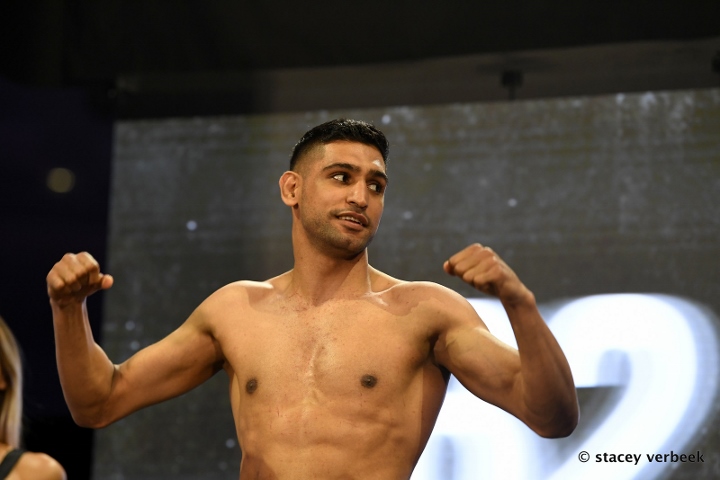 Khan questioned Crawford’s level of opposition, even though Khan considers the three-division champion to be one of the best boxers, pound-for-pound, in the sport.

“He’s fought decent guys,” Khan said. “You can’t take anything away from a fighter. He’s beaten some decent guys. It’s all about timing. It’s all been good. And you have to respect what he has done in the game. It’s boxing. He is unbeaten. Even against guys who were lower caliber, or guys we knew he was gonna beat, just to beat them and still be unbeaten is very good, because we all make mistakes in boxing. He’s been one of those guys who hasn’t made those mistakes, so I respect that.”

All of the above and yes, the only thing the quitter can take from the sport is money. He will always be remembered as a quitter,glass chin,easy meat strawberry thief. Goodbye to a real wanker.

wonder what he's going to say after this fight

Khan didn't look very confident when he was interviewed today. He's making a lot of money but it's not an easy way to make a living.