Maybe Amir Khan won’t fight Kell Brook next after all.

Multiple sources have informed BoxingScene.com that promoter Bob Arum’s Top Rank Inc. has offered Khan a $5 million guarantee to challenge Terence Crawford for Crawford’s WBO welterweight title March 23 at Madison Square Garden. Before an intermediary reached out to Khan recently on Top Rank’s behalf to gauge the British star’s interest in facing Crawford, it appeared Crawford would make an optional title defense against Luis Collazo on March 23 at The Garden.

Collazo has agreed to terms to challenge Crawford in 3½ months, but Crawford has not yet signed a contract. 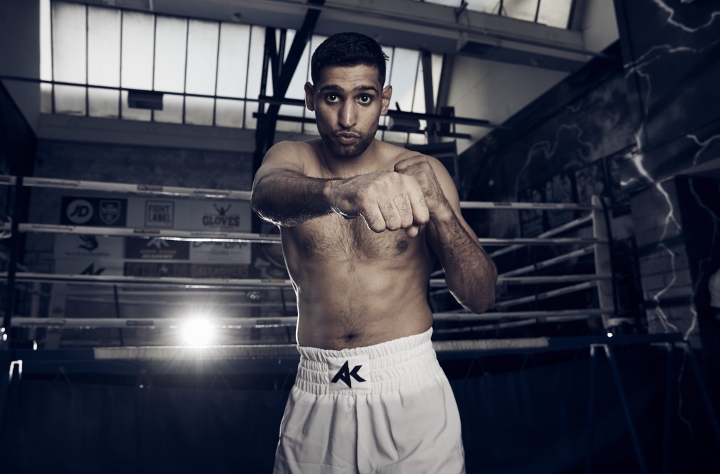 Khan, meanwhile, seemed destined to finally box Brook in his next bout before the Crawford fight became a realistic possibility last week. The former IBF/WBA 140-pound champion told the Daily Mail for a story posted to its website Monday that he is seriously considering challenging Crawford instead because he feels his lucrative domestic showdown with Brook could still be made if he loses to Crawford (34-0, 25 KOs), who’d be heavily favored.

The polarizing Khan (33-4, 20 KOs) would be a much higher-profile opponent for Crawford than Brooklyn’s Collazo (38-7, 20 KOs). Khan also beat Collazo pretty easily in May 2014, when Khan dropped Collazo three times on his way to a lopsided, unanimous-decision win on the Floyd Mayweather Jr.-Marcos Maidana undercard in Las Vegas.

If Crawford fights Khan, it would headline an ESPN Pay-Per-View card. Crawford-Collazo would air live on ESPN.

Khan, who’ll turn 32 on Saturday, is conflicted, according to sources, because he feels losing to Brook would do much more damage to his status and reputation than a defeat to Crawford, of Omaha, Nebraska. Whereas Brook has been beaten up and stopped by former middleweight champ Gennady Golovkin and IBF welterweight champ Errol Spence Jr. in recent years, the undefeated Crawford is considered one of the top two boxers, pound-for-pound, in the sport.

The Brook bout, however, could be worth more than double for Khan than he would make for fighting Crawford because Khan-Brook would do tremendous business both at the gate and on pay-per-view in the United Kingdom.

The 32-year-old Brook (37-2, 26 KOs) is scheduled to square off against Australia’s Michael Zerafa (25-2, 14 KOs) on Saturday at Sheffield Arena in Sheffield, England, Brook’s hometown. If Brook wins what’s essentially a tune-up bout, promoter Eddie Hearn had hoped to finalize a Khan-Brook bout for sometime early in 2019.

Hearn signed Khan to a three-fight contract with Matchroom Boxing in January for the express purpose of arranging a long-discussed bout between Brook and Khan.

Brook, a former IBF welterweight champion, has agreed to move back down from 154 pounds to the welterweight limit of 147 to encounter Khan. Brook reluctantly has agreed to some form of rehydration clause for a fight against Khan, which would prevent the bigger Brook from adding too much weight from the time of their weigh-in until the morning of their fight.

[QUOTE=KTFOKING;19322792]At least we can stop the stupid myth that only PBC will be airing PPVs now and that PPVs are dead. I don't know, but some DAZN/ESPN+ movement started where they were going to erase the PPV model. Like how…

[QUOTE=Mister Wolf;19325283] This is vs a converted kickboxer. Afterward he ran back down to 135 being quoted saying 140 pound guys have a size advantage over him. Now you tell…

[QUOTE=rudy;19325053]Yes it does make sense EVERYBODY loves to see Khan knocked out again, he made Canelo look like a monster so great fight for Crawford. What earth made them think they could take on Crawford last fight for him Khan.[/QUOTE]…

Sorry, but I just have zero interest in Khan anymore. Can I be the only fan who feels that way?