Khabib Nurmagomedov: You Have To Take Risks Like Tyson Fury To Become A Legend

“No risk it, no biscuit” — it’s a phrase famously expressed by the offensive-oriented coach of the Tampa Bay Buccaneers, Bruce Arians.

"If you don't reach for greatness, you'll be average for the rest of your life," Arians once explained of his motto.

Halfway around the world in a completely different sport, undefeated Dagestani UFC lightweight champion Khabib Nurmagomedov is living by that axiom ahead of his main event showdown against Justin Gaethje at UFC 254 in Abu Dhabi’s Yas Island on Saturday.

“If you want to build yourself and become a legend, you have to take risks,” Nurmagomedov told ESPN leading up to his upcoming bout. “When you fight somebody, it has to be risky. People like to talk, will he lose or will he win? Every fight has to be the same. For example, Tyson Fury. Why did Tyson Fury become big? He took the [Wladimir] Klitschko fight and beat him, when people were talking about Klitschko beating him. He fought Wilder in a draw, then he fought Wilder again — 50-50. People talked about Wilder knocking him out, but he came and smashed Wilder and dominated him. That is why he became big. You have to take on a challenge. People like to talk — maybe [I'm] going to lose, but right now, that's the position [I'm in]." 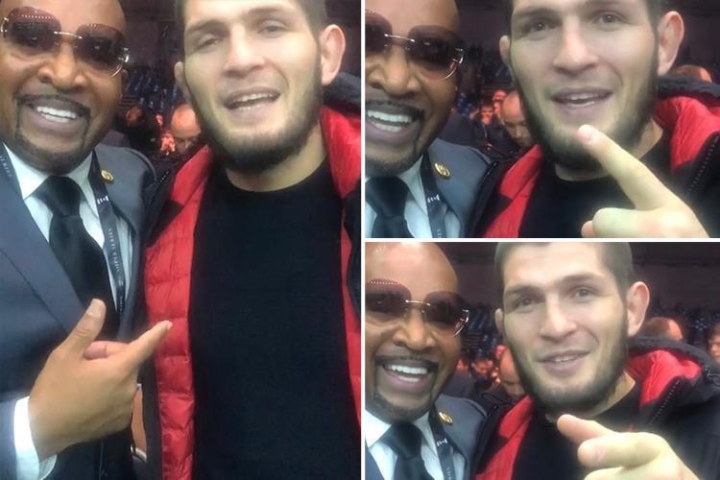 Nurmagomedov later continued the boxing-and-Fury oriented conversations, listing the British boxer and WBC heavyweight champion as one of his four top fighters in the sport he admires, along with Canelo Alvarez, Oleksandr Usyk, and Vasiliy Lomachenko (before he lost to Teofimo Lopez).

Nurmagomedov further focused on Fury and even wore his matchmaker hat.

“I really want to see Usyk vs Fury. It’s gonna be a very good fight,” said Nurmagomedov. “[Usyk] has very good skill and technique, Tyson Fury too. [Usyk] is not like other heavyweights, more technique, his footwork is very good, his conditioning is very good, I really wanna watch Usyk against Fury.”

Fury’s next risk will come Dec. 5 at the Royal Albert Hall in London against an opponent still to be determined.

Fury was supposed to fight Wilder for the third time this year, but he proclaims that ship has sailed due to an expired contract.

After Fury’s winter tune-up, he’s set to exchange fists with Anthony Joshua in a mega-fight both Nurmagomedov and Arians would surely approve.

[QUOTE=jonnyc420;20840528]My apologies, and I agree most major stars in the sport have that legion that see no wrong or need for improvement. I [B]on the other hand hope Fury puts the nail in the coffin and proves he is the…

[QUOTE=Get em up;20836976]I'm not hating on him in the least. Read my post again and tell me where I say ANYTHING negative about Fury. I'm speaking of a group of Fury fans in particular as a matter of fact. I…

[QUOTE=CHOWWOKKA;20836822]Khabib just defended his title with 2 broken toes and a broken bone in his foot. Why does Manny have to make up a "shoulder excuse"[/QUOTE] Pac ruins lives.. :lol1:

Lol you're right on that sir