Kenny Porter: They call Danny Garcia a cherry picker for a reason

Over the past few years former two-division champion Danny Garcia (34-1) and his father/trainer Angel have laughed off criticism that they "cherry pick" their opponents.

The "cherry picker" talk began when Garcia blew out an over matched Rod Salka in 2014. Salka had campaigned at lightweight and moved up to a catchweight of 142 pounds for the bout.  Fights against past their primes Paulie Malignaggi, Robert Guerrero, Brandon Rios and against Samuel Vargas did little to diffuse that criticism.

Next up for Garcia is a fight for the vacant WBC welterweight strap against Shawn Porter at the Barclays Center.  The fight takes place on September 8th and will be televised by Showtime. 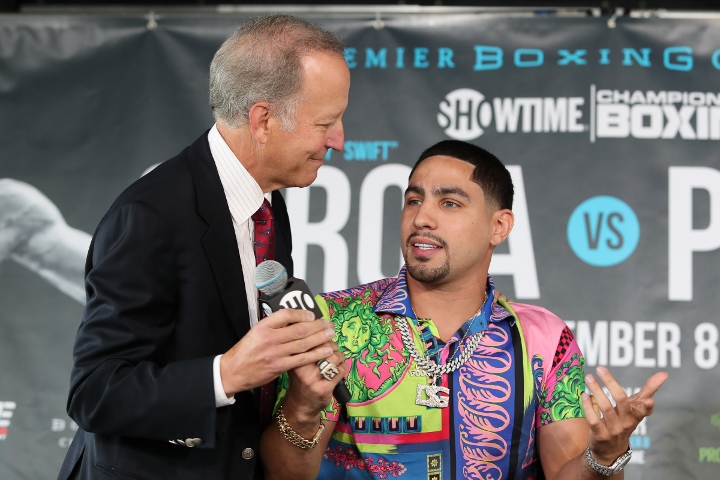 Porter's father and trainer Kenny has also been critical of Garcia's past opponents and believes that the difference in class will be very evident on fight night.

"He has always been a guy that could fight at 147. He was just going down to a lower weight class so that he could have advantages and those advantages he has taken advantage of," Porter told BoxingScene.com.

"We know what happened when Shawn Porter and Keith Thurman were in the ring. You had to stand on your feet the whole entire night. Then Keith gets in the ring with Danny and Keith says, 'Hey Danny you can't touch me because your feet don't work.'  Danny couldn't touch him so they were booing that fight by the fourth or fifth round. Be real about what you really can do. The only thing that matters is on fight night what happens. If you look at some of those same instances where we are dealing with those same guys we are not having this kind of conversation because I think that those type of guys we just named they wouldn't have been able to compete with Shawn."

[QUOTE=ramses07;18981322]Not the biggest danny fan But dude isn’t a cherry picker Got in there when khan and Lucas were hot Took on Keith too Sure he took on Salka[/QUOTE] He isnt hte most egrecious but he is a cherry picker.…

[QUOTE=j.razor;18982932]You got it a*s backwards. kenny is the obnoxious shet talker but Angel keeps it 100, no sugarcoating.[/QUOTE] Angel always keeps it 100% ignorant.

Damn i dont know why it seems everyone has a problem with Danny. Say what u want but dont say he is a cherry picker, thats just assinine! I really hope he kos porter! Danny said he has never ever…